"Take heed, Mariner! the Host of Man is at the Crossroads; Fate is in the balance, prophecies converge; Dark Gifts come at great price."

-The Black Staff of Argos

The mythos of the Book of Worlds is one part quilted tapestry, one part hodgepodge, and three parts larceny. As with a lot the setting, it consists in great part of bits and pieces borrowed or outright stolen from literature, movies, games or RL. Some elements are transplanted more or less on root from where they originated, some have been cut from their host and grafted on the new stem. For good reasons, I will not lay it all out here, rather, I will give you the two-copper-tour, and the thought behind it all.


First off, I'll let you in on the Genesis. Not the metaphysical in-game one, but how it all has come into life (as it were). As mentioned, the setting was born with an act betrayal and the swearing of fealty to a dragon. After this, the stories that made the Book came from a couple of years of mostly one-on-one play. The character was Franko da Cola, and the chronicle was that of his fall, and ultimately, his ascension. For most of this, it was actually somewhat of a paradox to me, as the game was one of imminent gehenna, of the end of the world. My world. My baby. Franko, I must say, is a fundamentally sick puppy.

Each session seemed to make the End of the World more certain, more imminent. He was the one who served the dragon in its first vulnerable years; he was the one who aided the Orc in the first wars where the tribes of the Black Bloods were united into a vast Horde. He was the one who broke the Seal of Argos, sundering the barrier that kept Outsiders from crossing into the world. He also partook in rituals too dark and sinister to put in text, he called upon the powers of the Dark, and he even stole the soul of a fellow Man. Oh, and he went into one of the Hells and freed an imprisoned demon, then he brought him back to Argos and let him loose. All of this by his own free will. A right fine customer, this Franko.

The Myth of Man


"Man, the most serene of creatures, rose from the very dust of Creation by his own will.

"From the darkness between the stars, the Exarch came, floating through the eons. When the Great Enemy fell into the world in the First Age, it brought the Darkness. Elf and gods stood against it, but only when Man arose, taming the fire of the gods, and thus claiming his place as the rightful master of Creation, the First World War was won. The Orc, the servant of the Deep, were vanquished, and Argos was cleansed.

"The Elf and the gods, once, when Man was still unawakened, his guardian, grew jealous of his prowess, and forgot the ancient bond of blood forged in combat with the Ancient Foe. In the Second Age they turned against Man, and made war upon him. Thus the Second World War was thrust upon him. Man, besieged on all sides, turned to himself and found Reason. This, the very force of Creation, strengthened his mind and purified his soul. Against the traitors, Man stood victorious."

-The Book of the World

This is the core of the mythos. It tells about the coming of the Exarch, the great wars, and the rise of man. The Exarch, the Great Enemy, the Deep, the Darkness, etc. are all names of the same entity. Among friends (and out of game) it is often referred to as Cthulhu. Some have even been known to chant "ÏA, ÏA, FTAGN!" in a more or less composed manner. Old squid-face has been adopted, and now lies dormant on the bottom of the ocean, dreaming that "even death may die". Sounds familiar? After some of Franko's less glorious adventures, cults worshipping the Drowned Man can now be found hiding in most ports of any respectable size. Their rites often involve drowning a man to hear the gospel of the Deep. 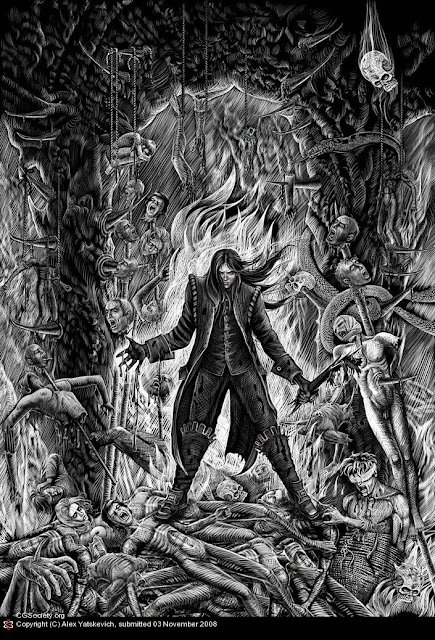 The Gods
In the last great war man killed his gods, all but a few. Now the Younger Gods are taking the scene. The first was the very same bugger who set all of this in motion, the very same Monsir da Cola. He actually became three gods. There is Shaitani, the Drowned Man, there is Al Azwad, the Black Man (son of Man, not born by woman), and finally, there is Morfeus, Lord of Dreams, Prince of Nightmares and the Path of Thorns. Now, worship of gods, or even recognizing their existence, is blasphemy, and an act of enmity against Man, according to the Temple and the Cabal, but there are now growing cults to all these three, not only Shaitani. There are other gods as well. Aziz, the Last Prophet, Servant of Man is one. He died in the final battle against Grishnak, the Light of Creation. Grishnak was slain here, before the broken White Tower of Fate, by Morfeus.


As it happens, Aziz was once the manservant of Franko, while Grishnak were the very same demon he freed and brought home.


The last of the Younger Gods, so far anyway, is Agaron, the Warlord. Interestingly enough, this one is not affiliated with any player of mine, except for the fact that a PC, an Orc actually, were killed when he transcended.


There is one Older God known to be around as well. In the deep south of the Dark Continent, the Stygian Empire still worship Dís, the Ferryman, God of Death. This one is quite important, as the myth will have it that he is the one who guards the tomb of the Exarch. So there might be something it the rhyme about death dying anyway.

The Hierarchy of Creation

When the Pantocrator lit the first light of Creation, he set the Daeva to guard it. Of these, many have fallen, or disappeared in the vastness of the Multiverse. Then He created the Eldren, and he set them to guide the Younger Races. Of the Younger, we know of Elf, the first of them, and Man. The Pantocrator, or the Architect, has vanished, and in His stead the Eldren assumed the responsibility of guarding the Creation. Many of them grew arrogant and prideful, and styled themselves Masters of the Multiverse. Only one of the Eldren Ships is known by name: the Olympos.

Magic is awoken; the Black Bloods (or the Orc, if you will) has united under the Great Khan Ghurandakh and conquered the colonies on the Dark Continent. They have marched south, and are at war with the Stygian Empire. The gods are returning to Argos, and outsiders now walk hidden among Man. The Temple and the Cabal are coming down hard on heretics, blasphemers and Enemies of Man. Amidst all of this, a combined army, 'the Host of Man' have been assembled to reclaim the lost colonies. The Deep is stirring in its cold grave, and the Olympos is coming.

I will return to several of these issues in due time, but this is the promised tour of the mythos. As for the thought behind it all, well… The Book is the product of interaction between players, and between players and Storyteller. I try to provide enough bullshit to create a good framework for the spinning of nice, long yarns. If a player has an idea that is better than mine, I try to swallow my pride and toss my original plan on the scrap heap, or present a compromise. The incorporation of Cthulhu is one such example. I had thought to make the Deep something nasty and evil, but in play it ended up with a more or less direct transplant. Besides, there is no shame in copying the work of a true master.


Next: I might go for the Temple and the Cabal, or something else entirely.