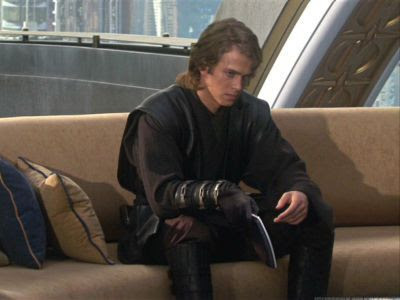 A long time ago, in a galaxy far far away, Anakin "He's holding me back" Skywalker suffered from Borderline Personality Disorder (BPD). This is apparently not news, but since it was on the radio today, I decided to post on it. For my part, both the fact that I am a SW-fanboy, and that I work in psychiatric institution peaked my interest in the topic.
I must admit that when I heard the arguments for why , I had an of-course moment. Then again, I only watched the Gungan-infested prequels once, and more or less disbelieved the whole thing.
"He's suffering. And he's suffering from a disorder"
-Dr. Eric Bui (source: Wired.com)
So, what is BPD? The following is from the Web MD's PBD-page. "A common feature of this disorder is fear of being left alone (abandoned), even if the threat of being abandoned is not real. This fear may lead to frantic attempts to hold on to those around you and may cause you to become too dependent on others. Sometimes you may react to the fear of being abandoned by rejecting others first before they can reject you. This erratic behavior can lead to troubled relationships in every area of your life."
These are some of the most common symptoms:
Sounds familiar?
There are those who think that by giving Anakin a psychiatric condition, and one mostly found in teenage patients, the writers may have helped lessen the stigma attached to such disorders. Maybe, but I think it is just as lame as the Midichlorians. Whatever happened to the Light Side vs. the Dark Side? It's like they're saying that Darth Vader isn't evil, he's just not properly treated and medicated.
Still, it does make sense. And it touches on a vaguely formulated pet theory of mine. Some of the disorders we treat today may well have been seen as a resource in earlier days. Especially those that have symptoms like aggression and a black/white-mentality. Young adult males with such conditions tend towards a physical solution to their problems, and often have a strong sense of loyalty.
Today we discourage such behaviour, and try to treat and medicate those who are diagnosed. In a time when the local community or tribe could be threatened by neighbouring bands or strongmen, these men would probably have had a well defined role as warriors; attacking the enemy without hesitation and with a frightful disregard for personal consequences.
So perhaps it's just as well that Anakin grew up a long time ago, in a galaxy far far away.
[Picture rights: Lucasfilm]