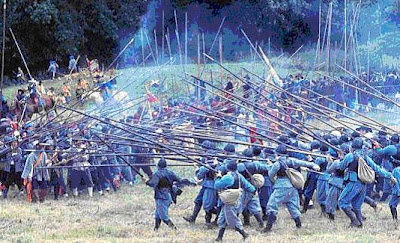 Last time we played the lads decided they wanted to try out the War Box. The War Box is a grey cardboard box, on which I've written... yes, War Box, in big black letters. At one point I also drew a poor Elder Sign on it. It contains all that's necessary to run a set-piece battle.
I will not go into the details right now, as it's quite late, and I'm working tomorrow. But since next game is on Monday, and the boys have asked for a battle, I need to get this up there. I will try to sneak in two more posts (a Chapter and a background-post) before we play, if time allows.
I apologize in advance for the poor quality of this document, but it is an old system I haven't done any work on in years. Its roots is a system developed by a couple of friends of mine for the AD&D setting Birthright, and I later did some work on it for a game-system I made back in the dawn of the century. The English version (the newest) was started before the BoW was created, and I've done some quick adjustments just now.
Should there be an interest, either from my players or from the blogosphere, I will polish it further (Scribd promises to update the embed as I update it, I believe), and I might post the unit cards as well. Any questions and/or comments are as always welcome.
War Box v1
[Picture source: TAW's blog]