Did I mention I love history?

I do. I love history because it is full of people, events and phenomenons that surpasses everything fiction has to offer. Therefore I draw a lot, if not most, of my inspiration from the annals of our own past. As an example of this, I will devote this post to what may very well have been the most awesome attempt at attaining the Shock-and-Awe effect so many commanders have strived to accomplish.

Ladies and gentlemen, I give you...

The Winged Hussars of Poland

Imagine hundreds of steel-clad horsemen thundering towards you. Man and beast bound together in rage and hatered, all bent on destruction. You feel the very earth you stand on shake, and the din of hooves and steel makes it impossible for you to hear anything but your own cries. What could possibly be more terrifying?

What if they looked like the proverbial angels of death? 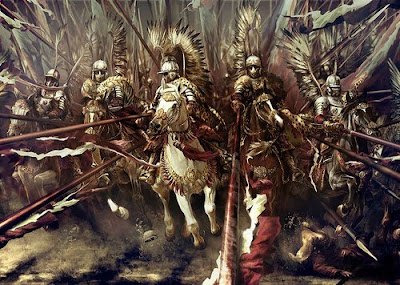 In the 16th and 17th century Europe, people were, as a rule, superstitious. Plagues, defeats in war, the still birth of a child, even physical disfugurations, were all blamed on the Will of God. And this is what the Poles took advantage of when they attached wings to the backs of their cavalry. The 'Golden Age' of the husaria began with the Battle of Lubiszew in 1577, and lasted til the Battle of Vienna in 1683. During these hundred years, the Winged Hussars fought countless actions against just about every army in Europe, and rarely lost a battle.

And they still look awesome. 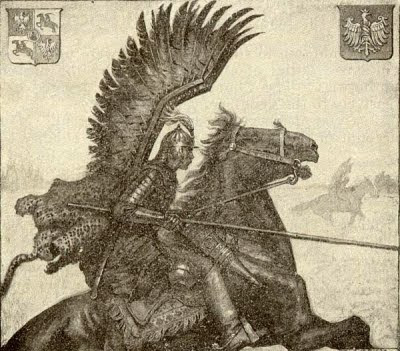 In the world of Argos, the Ruhanian Hussars, devout Humanists and fiercely loyal to the Arch Primarch of the Temple of Man Supreme, use such wings, and inspire the same terror in the hearts of their enemies. The Angels of Death is one such unit. In 1020 YE it became famous for supressing the First Lazarian Uprising, crushing the peasant army, and massacring thousands in the aftermath.
Wikipedia
[Picture source 1 dziarski @ VisualizeUs; 2 The Husaria]