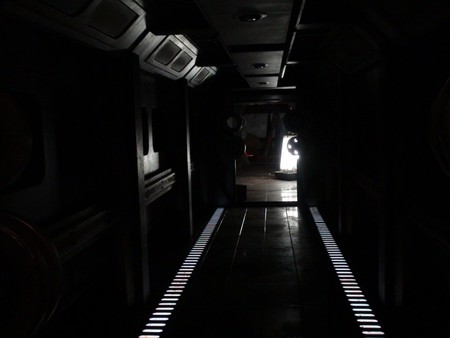 Having reached the position of the OUT mother-ship, EXODUS I, the heroes decide to play fair: one by one, they enter the labyrinth designed to bewilder, weaken, and kill them – Bansl has already gone missing, soon others will too; meanwhile, van Zaar reappears with new visions of imminent doom.


With the Pius laying several tens of thousands of miles out from EXODUS I's position, the threat to the ship was not immediate. The cabal thus had some time to plan and execute their actions before the Reavers launched by the mother-ship reached firing distance. After some deliberation, Toadface was teleported into the antechamber. Having transformed himself into a small swarm of wasps, he then entered the tubes of the pneumatic mail system. Galan tried to stay in touch with him, but as he delved deeper into the sanctum of Dr. Mörbius, Toadface passed beyond the captain's ken.
As he pressed onwards, he slowly managed to piece together enough pieces to give him a picture of the puzzle. The sanctum was a labyrinth (later investigation by Aegir revealed it to be in the shape of an octagon), and Sirens, a.k.a. Pickled Marauders, or Mage-in-a-jar, were placed on strategic locations. The corridors were also patrolled by Hellghasts. Little by little, the Primordial magician managed to figure out something about the workings of the tubes he travelled. There were several valves, some open, and some closed. As he got closer to the centre, he started to recognize certain markings inside the tubes, and so he was able to move through the labyrinth with a purpose. Eventually he reached what looked to be an important lock.
In the meantime, the cabal had been discussing what to do next. No clear plan had emerged by the time van Zaar appeared. Some might say that the sudden appearance of someone deep in the Void would be cause for concern, or at the very least questioning, not so the Pius Cabal. Van Zaar himself, in his characteristic enigmatic and pompous manner, only mentioned having lived a lifetime since his parting some two weeks ago. Then he demanded to know why the cabal had abandoned the assault on the moon-base. He also chided the captain for having lost both the Bombman and the only healer aboard. A debate about whether Galan should attempt to snatch a crew-man from one of the approaching Reavers ensued, but with the Arcane shielding of the enemy vessels, and the smothering weight of the anti-magic aura of the Saragasso Dead-space, this plan was abandoned. With two members of the cabal now lost in the bowels of the construct-ship, and with his normal disdain for the haughty ways of the wizards, Aegir readied for action, and shortly after, he was teleported aboard.
In the meantime, the Reavers had come close enough to demand action. As so far, no cloaking strategy has proven to successful, van Zaar now suggested turning to the Arcanum of Death. Before the ship was teleported to a new position, he slew all magical auras aboard, hoping this would do the trick. Master Tito, at this point, following up on the observations of an apprentice, noticed that the main transponder relay on the enemy ship was transmitting a summoning signal on the Deep Frequency, by all likelihood to a named entity – with Bansl missing, however, none aboard could decipher the call.
Sensing that time was running out, the three heroes left aboard the Pius now decided to take the fight to the enemy. Galan, Tito and van Zaar left the ship in the hands of Adeptus Ludenius and Commander Spearhawk, and teleported in to the antechamber. Aegir had now scouted the first of the rings in the labyrinth, and Bansl was still missing.
Toadface, deep in the sanctum of EXODUS I, faced with the lock he could not open, had decided to change his strategy. He ended his spell, and the bees turned into the lumbering shape of the primordial woodsman. Pipes and beams broke under his weight, and he fell through a tangle of wires and into a nightmarish chamber. Here he found himself in a forest of infernal machines, clanking, whirring and sparkling, wires running like demented spider-webs between them, and in the middle of the chamber, in a glass-like pillar connected to the Machine, Deep Thought himself, Dr. Mörbius. No sooner had he got his bearings when a network of conductors flashed into action, locking him in a field of dark energy.
Our hero did not despair. After all, he has once ridden a dragon! Now he challenged Deep Thought in mental combat. The two exchanged thrusts and parries, and while neither gained the upper hand, it was clear that the magician was at a disadvantage when faced with the combined might of evil genius, Goethic Calculators, vast amounts of energy, and demonic power. Luckily, at this point, Tito managed to establish a Connection with Toadface's corpus. While facing a psychic assault from a Siren, he was able to bridge Galan's spell, and thus the three latecomers were able to join in. The Certamen was now between the Pius Cabal and Dr. Mörbius.
The first casualty was Master Tito. The Siren he had been battling was destroyed by Aegir, now rushing to defend the magicians who were now in a trance. Still, weakened by his fight with the Siren, he was cut down when Deep Thought released a massive charge of dark energy into the mind-field.
And thus the chapter ended.
Storyteller's note: First, Bansl's player was not available for this session, hence the Bombman's disappearance. Further, as mentioned briefly in a previous post's comments, we got right and properly hammered this evening. As tradition dictates, he who has passed through Tax Free must put whisky on the table. I had, and I did. Also, the inherent danger of a Friday-game is that no one has to work the following day. We stayed at the table longer that usual, but with the massive amount of banter, and the steadily progressing state of fucked, things were somewhat vague at the end.
I had fun!