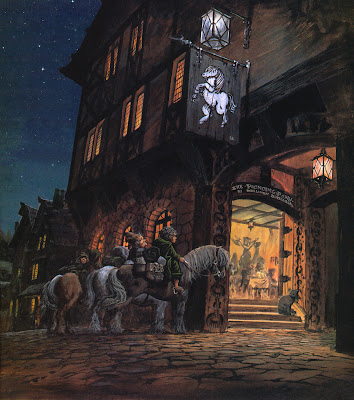 At the Sign of the Prancing Pony
Artist: Ted Nasmith
Inns are old classics in fantasy litterature, movies and roleplaying games. Therefore, this post is about the inn, the starting-point of countless stories. One might even say that English litterature began in an inn, in Chaucer's Canterbury Tales, where the pilgrims meet in The Tabard. The inn is a place of chance meetings, it is a safe haven for the weary traveller, it is a place of danger where thugs wait for the next brawl, and much more.


Perhaps the most famous inn in fiction is the Prancing Pony, from Tolkien's Middle-earth, where the charming, although somewhat simple, innkeep Barliman Butterbur does his best to keep his patrons safe and satisfied. It is also the setting for one of the most iconic inn-scenes ever, where the heroes first encounter the dark, mysterious stranger sitting alone in the shadows. How many have not played that same scene more than a couple of times? I know I have.


The history of the inn dates back to the Roman network of roads that bound the Empire together. In the middle ages, a traveller could often find lodging in monasteries along the road, but as the numbers of pilgrims and travellers grew, inns sprang up to meet the demand for accommodations.

White Hart Inn sign
Source: Architectural Antiques
The signs of old inns tended to depict, as litterally as possible, the name of the establishment. As the customers were often illiterate, a sign depicting an actual white hart, or a prancing pony, sent a much clearer message than a collection of letters.
Throughout the sixteenth and seventeenth century, England and other European countries passed laws regulating inns and public houses. In England, the landlord of an inn was required to repay any property stolen from a guest three-fold, and standards of cleanliness were set. As early as 965 CE, King Edgar of England decreed that there should be no more than one alehouse per village.
The public house, or alehouse, differed from the inn in that it rarely offered lodging. Where the inn more often than not would have stables, a common-room, beds and a kitchen, the pub could be as simple as a one-room building with little more than rough-hewn tables and benches for the patrons.
In larger cities, inns also served as long-term lodgings for wealthier merchants or noblemen while they conducted business in town. Some also served as a court away from court for royalty and their supplicants -- something less formal, and perhaps somewhat more relaxed.