The Journal of Captain Gryff Galan 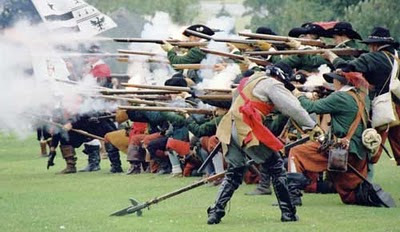 Source: The Earl of Northampton's Regiment of Foot
We returned to Rederhafen. Bansl, still high on his Mastery, was eager to put out the fire, and took matters into his own hands, so to speak. Had he not been stopped he would have gone on to put the entire fire out himself.
To avoid chaos breaking out in the city, Verasius, Adeptus of the Ordo Hermetica, was given the task of taking control the remaining flames. Which he did.
The Tradesmaster was sent down to the Prince. His quarters thick with gloom when our man Drake came in with The Light of Life in his hand, giving air to the room and aid to the Prince.
Meanwhile, on deck was El Rey Mistario. A joyful sight, indeed. Though he was not as joyful himself. ”So, it has begun”, he said, staring into the flames. We greeted him, all except Yolander, who had been sent away by the emerging M’Narcl. ”You are back amongst us, at last!” ”It has been a long journey”, Mistario whispered. He is still frail.
Yolander, clear-sighted as he is, pointed out the significance of the death of Captain Armand of the Kraken. The Exarch does not produce strategically gifted brains. We took out his Number One.
I located Rowar II 7 miles south of Stafford, at Sander Bridge. And after Arkan (Arcrash getting his names confused), a tad impatient, had walked out, the rest of us quickly agreed on the course of action. I found the Royal Crown of Pendrell, Bansl apparated it out, and we travelled to the soon to be King by portal.
I was pleased to find someone trying to hinder our arrival. And even more pleased to learn that it was, as I suspected, the Argonauts, who had flocked around Rowar, the New Hope of Pendrell. There was Commander Sir Geoffrey Colomb, and 32 others. We also learned that all the Navicrons have fallen into enemy hands.
At The Crowning, The Prince Exalted spoke to The King. He has a truly fantastic presence, and speaks both sense and wisdom. ”A Crown can not be given”, he said. ”It must be taken”. He has really found his footing now, since he killed The White Stag. He will unite Man.
32 000 men on our side. 12 000 men, better equipped, are positioned to hold Sander Bridge. ”Where you cannot cross, you go around”. Not only will we cross, we will empower the Argonauts in doing so, by making them a part of The Crossing.
In The Ambush at Sander Bridge we lost 1700 men, and killed four times as many. Three thousand were captured, and three thousand fled. 8000 Repeating Rifles were won.
Valdvix, the Blue Fox, was so named by his Master.
And the King has Awakened. He was given a book I found in the library of the Blackfriars, The Mind of Man, as a parting gift.
What a day! We have crowned an Awakened King in Pendrell. The Parliament is surrounded. When it rains, it really pours.

Storyteller's note: This is The Captain's first post. He has been suckered agreed to do the write-ups of the weekly sessions. These posts reflect his views and experiences, and hopefully the other guys will speak up if their opinnions differ radically. I may add pictures, but apart from this note, I will only add my observations as comments.

Written by The Captain