How to bury a witch 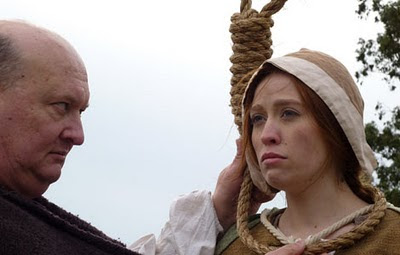 So, you've got a certified witch on your hands, and after you've hung her, you start to worry she'll come back from the dead and wreak havoc on you and yours. Fear not, the guys who did this professionally back when there was still a business in witch hunting came up with a safe way to bury one of Satan's chosen. Here's what you do: You drive 7 nails through her jaw-bone, and place 17 dice in her grave.


As it happens, that's exactly what someone did in Piombino, Italy, some 800 years ago. A corpse found with nails in it's skull, with dice surrounding it has led experts on the field believe this to come to this very conclusion. Most often witches were not buried in hallowed ground, and hence their graves will often have been destroyed by construction, or simply lost and forgotten. This particular woman most likely came from a wealthy family, and her folks probably donated liberally to the church to give her a chance of getting into Heaven.

Disclaimer: This blog does not advocate torture, burning, hanging, or any other form of witch-abuse. If you are in need of a non-harmful way of verifying your suspicions of witchcraft, you should compare your suspect's weight to that of a duck. If you happen to be right, their weight will match, and you should take care not to injure her in any way. Remember that witches have been all but hunted to extinction by past generations. You wouldn't burn a giant panda, would you?

Labels: Because I can 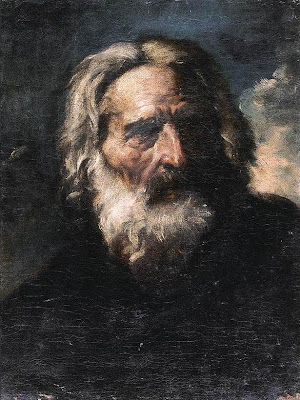 Years ago,  back when the Redlands were still called the Duchy of Diem, the Monastic Order St. Euridicius owned several large wineries in the region, all run from the Abbey of Wolfgarten. The order's vows of poverty had long since become an empty formality, and the Abbey's luxury was said to rival that of the Ducal Palace in Zalburg.

Brother Aramath of Liesse was the third son of a Narbonnian grain merchant, and at an early age he was brought to the monks of St. Euridicius for his education and future career. He never showed any great affinity for numbers or theology, and one may even say he was a more than a little lazy. Still, his father's donations and his singing voice made sure he got to say his vows when he came of age.

Once he became a brother of the cloth, he was sent to the Abbey of Wolfgarten where he served in the obscurity of utter mediocrity for almost ten years. As with many of his brothers, the monastic life led to a steadily increasing gut, and a deteriorating health. In the summer of 1022 YE his heart all but gave in to the weight of his corpus, and he fell down a flight of stairs. The fall broke his left ankle, and he was taken to the infirmary.

At the same time, outside the walls of the monastery, the Red Death washed over the land, turning layman, noble and clergy alike into mindless, walking dead, hungry for the flesh of the living. A monk returning from a tour of a nearby wine-yard was attacked by one of the afflicted and bit in the arm. Fright kept him from informing his betters, and within days he suffered the Red Death. With the curse now loose inside the walls, some of the monks fled, others turned to prayer -- none survived.

As madness gripped the Abbey, the Infirmarian locked the infirmary doors from the outside, hoping to save some of the sick, injured or elderly monks lying inside. In the summer heat, and without access to food or water, death came quick or slow to those poor souls, but it came to all. Brother Aramath's broken leg turned gangrenous, and without aid from the physicians, his body and mind was racked by a savage fever. For days he hung on, while his brothers died around him in the hot room, smelling of piss, desperation, vomit and death. At last his body could not take it any more, and he could feel the last fibres of his life-thread snapping.

It was in that very moment, as the cold darkness closed in around him, that the thing from the crypt appeared before him. It offered him life, and he took it without a second thought.

When Aramath broke through the doors and emerged into the world again, he found it to no less hellish than the nightmare he left behind him in the infirmary. Partially devoured corpses lay in blood-smeared hallways, corpses shambled aimlessly around in the courtyard, and something cold and dead had merged with his soul.

In the decades following his brush with death, Aramath has become known in the Redlands as the Black Cantor. He spends most of his days walking the roads, paths and trails running through the once prosperous, now mostly deserted and infested with evil, region. Constantly singing psalms as he patrols his parish, he brings death to those who deserve it, be they living, undead, or supernatural. He even sometimes aid those he deems worthy of life. He was always large, but the black-clad, grey-bearded giant he is today bears little resemblance to the wobbling mountain that fell down those stairs so long ago. The radical paradigmatic change of his life also revealed his faith to him, and he will offer spiritual guidance where he deems it appropriate, which is to say almost everywhere. When stronger medicine is required, he uses a heavy oaken staff on which he has mounted the bronze tutelary from the Abbey's funeral shrine.

Hello again, and some thoughts on Geist 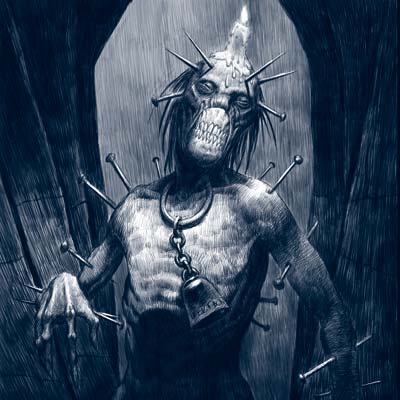 It's been a while. After the move I still have to successfully adjust my blogging habits to my new life. There have been great changes so far, and there are more to come, but I have not given up on this here thing. If you would like to to keep in touch with me outside this channel, please feel free to look me up on Facebook. If you have written an email to me, and gotten a response, you have my name. If not, feel free to poke me about it.

Though I have not posted much, I've been playing. Not as much as before, but still with relative stability. The latest, and most notable development, has been the addition of a new playable template.

Labels: Geist
Newer Posts Older Posts Home
Subscribe to: Posts (Atom)
This is a mostly inactive - but still moderated - blog about roleplaying. More to the point, it is a blog about my roleplaying. The blog was created as a forum for my writing and rambling about the games I ran in my own roleplaying world: the world of Argos and the multiverse surrounding it. The majority of the posts from 2011 and earlier will be on that topic.
In the past I have briefly explored the OSR, and for a while I posted on my quest for the roots of the hobby. I've also run a few sessions using a D&D 3.X hack as well a Cyberpunk/Mage-setting and I've played in a few different games. The present game is set in the multiverse that sprang out of the Argos-games, using the GUMSHOE/Trail of Cthulhu engine.
You will, of course, be able to find other things - as well as other games - here as well; at least in my mind, most of it is somehow connected to my storytelling and world-building.
Disclaimer: Links from this site to Amazon.com and DriveThruRPG are sponsored.
Scroll down for subscription options.