Detroit on the eve of the 21st century 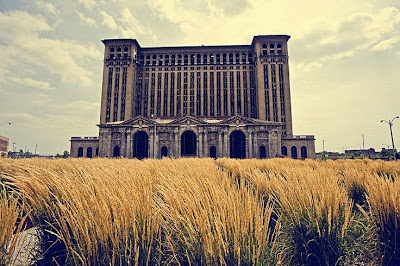 The once bustling Motor City has become all but a ghost town, with nature having reclaimed whole districts. For decades, the richer suburbs and the financial district managed to survive, while the rest of the town slowly withered. Finally, around the middle of the century, it became clear that metropolitan Detroit was dead. After that realisation, it was only a matter of months before all corporate and municipal activity were closed down. Those who could picked up and moved. Those who could not were left stranded in a dead city.

Today Detroit has become something unique, where frontier-spirit and gangland mentality has created something akin to a new Wild West. With drones and automatic weapons.

Labels: Cyberpunk, WoD
Newer Posts Older Posts Home
Subscribe to: Posts (Atom)
This is a mostly inactive - but still moderated - blog about roleplaying. More to the point, it is a blog about my roleplaying. The blog was created as a forum for my writing and rambling about the games I ran in my own roleplaying world: the world of Argos and the multiverse surrounding it. The majority of the posts from 2011 and earlier will be on that topic.
In the past I have briefly explored the OSR, and for a while I posted on my quest for the roots of the hobby. I've also run a few sessions using a D&D 3.X hack as well a Cyberpunk/Mage-setting and I've played in a few different games. The present game is set in the multiverse that sprang out of the Argos-games, using the GUMSHOE/Trail of Cthulhu engine.
You will, of course, be able to find other things - as well as other games - here as well; at least in my mind, most of it is somehow connected to my storytelling and world-building.