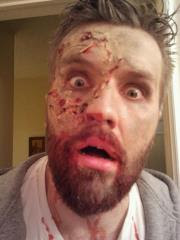 I'm a Norwegian. A Northern Norwegian to be more precise -- born and raised above the Arctic Circle. Ultima Thule, baby. It was there, in -91, that I first found my love for the game, an addiction I've got absolutely no plans of trying to shake. The gate-way game was AD&D 2nd Ed, and Forgotten Realms was the setting I first GM'ed. One day in the late 90's, I was bitten by Vampire: The Masquerade. Since then, I've been running with the White Wolf. There has of course been other games over the years, some good, some not so much, all enjoyable in their own way.

Of the other things I'm interested in, history and politics score high on the list. I've got a bachelors degree in history and religion, and like most of my countrymen, I'm a social democrat. Religiously I like to call myself an unconvinced agnostic, with a leaning towards pantheism.

I've lived in Bergen, Norway for more than a decade, and it was here that the world of Argos was born. I've been blessed with very smart and creative people to play with for pretty much all those years. No wonder I now have an entire multiverse residing in my (rather large) head.

Presently I reside in Southern Ontario, where I play casual games on both sides of the screen. A steady campaign may develop, but that'll come when and if. The important thing is to keep the dice rolling. I have some other projects going as well, and these may get some coverage in the blog from time to time.

Home
Subscribe to: Posts (Atom)
This is a mostly inactive - but still moderated - blog about roleplaying. More to the point, it is a blog about my roleplaying. The blog was created as a forum for my writing and rambling about the games I ran in my own roleplaying world: the world of Argos and the multiverse surrounding it. The majority of the posts from 2011 and earlier will be on that topic.
In the past I have briefly explored the OSR, and for a while I posted on my quest for the roots of the hobby. I've also run a few sessions using a D&D 3.X hack as well a Cyberpunk/Mage-setting and I've played in a few different games. The present game is set in the multiverse that sprang out of the Argos-games, using the GUMSHOE/Trail of Cthulhu engine.
You will, of course, be able to find other things - as well as other games - here as well; at least in my mind, most of it is somehow connected to my storytelling and world-building.