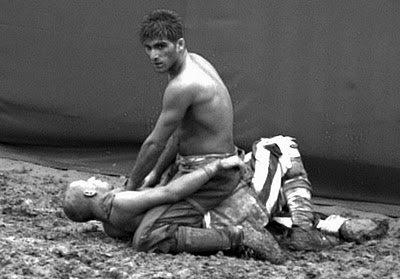 Those who know me know that I do not give a rodent's tail about sports in general. However, I recognise the fact that sports are a vital part of any culture. A made up culture should not be different, and therefore I have been giving this some thought. I could pinch Blood Bowl from Warhammer, or pyramid from BSG, but I'd rather not. There are countless other fictional sports out there as well, some more plausible than others.

Then it struck me. There has to be some real-world sports that would fit into the world of Argos. Some digging around the internets proved me right. I love it when that happens. 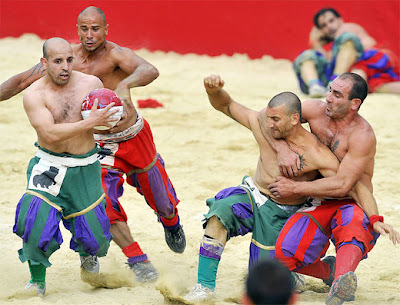 Calcio Storico is a Florentine sport from the late 16th century. The first rules were published in 1580 CE, and it is still played today. Each side has 27 players, you can use both hands and feet, and apart from kicking someone from behind, everything goes. The goal is to get a ball into a net on your opponent's side of the field, and a game lasts for 50 minutes, no breaks. That's more or less it. At least that's how I'm interpreting it.

Unfortunately, the English language YouTube video I found has embedding disabled, so you'll have to be satisfied with a good old [LINK]. Watch it. Seriously. If you are at all interested in the topic, it is well worth the five and a half minutes.

For the Wikipedia-entry on fictional sports, you can follow this link. 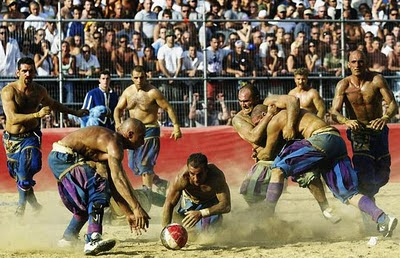 How does this fit into the world of Argos?
The history of the Calcio goes back to the days of the Old Empire, and is still played in most Erian realms. At times it has been tried banned, but never successfully. Most cities and many towns have a league, with games played during the summer. Neighbouring cities also often meet for bi- or triannual matches. Regardless of whether it is a local or a neighbourly game, honour and glory will always be at stake.