Into the Sewers of New York

"It must have been the third or fourth day -- time, at that point, had started to dissolve..."
-Alan Feuer 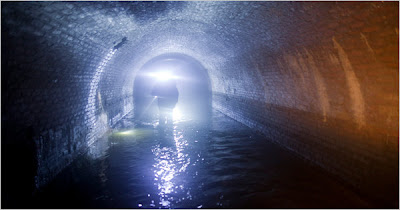 
It is not a long leap of imagination to add unnameable tentacled horrors, wererats, or perhaps a murderous cult of demon worshippers to the tale -- especially if you have the roleplayer's inherent ability to interpret everything as a potential scenario or plot-hook. Even if you were to disregard all those angles, Feuer's article (see below) offers an interesting view of one of the greatest cities in our world. There are, and will always be, a myriad of things we do not see because of our ingrained perspective on the world we inhabit.


The article written by Alan Feuer, invited along as the expedition's chronicler, is well worth the read, and the pictures, by Steve Duncan, are a must. You should also visit Duncan's homepage, for images from this, and other urban expeditions. For Norwegian readers, this link will take you to NRK's article about the delve.