"Be on your guard. God has slipped over the horizon." 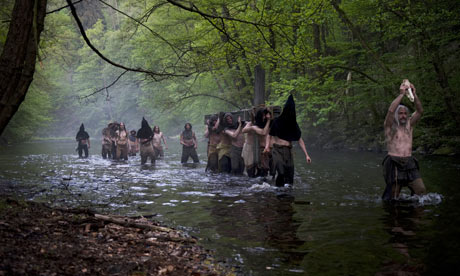 
I've intentionally kept this review very short, so as to avoid any spoilers (also, I have a wicked early day tomorrow).


In the year of our Lord 1348, the Black Death is ravaging England. Bodies are piling up, no one is safe from the plague, and people turn to God for deliverance. Rumours are spreading about a village deep in the marshes where death has no grip on man. The bishop's emissary, Ulrich (Sean Bean), is sent to find the village and capture the necromancer who rules there. The novice monk Osmund (Eddie Redmayne) is recruited as a guide for Ulrich and his men. As they journey into the marshes, they get further away from the fragile civilization of the Christian world, and closer to that which keeps people alive in such apocalyptic times. Here, their faiths are tested.


This is a seriously dark and scary movie. And I do not use those adjectives in conjunction easily. It has one of the best fight-scenes I can remember seeing, although this is not a sword-and-horses kind of flick. Likewise, it has some heavy Heart of Darkness over -- or is that under-tones? -- without it delving too deeply into the psycho-drama of either the book or the movie-adaptation. I would dare to say that Black Death masterfully balances traits from many genres as well as several themes and elements. It also bears mentioning that the location scouting in this film is absolutely brilliant -- it is shot in its entirety in Germany.


This is one film I highly recommend, and, yes, there is inspiration to be had.


On a related note, you'd do worse than read this article on The Guardian about religious films.