Reflections on Group Dynamics and the Problem of Epic 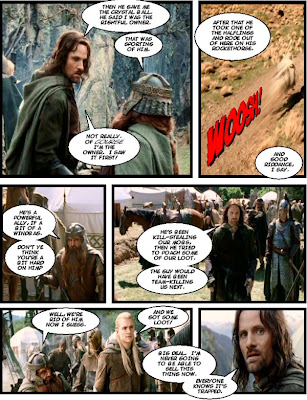 Last session ended with a rather frank discourse. While I heard things I found hard to hear, I also heard things I found profoundly wise. As I've said before, it is not often a GM gets direct, honest and constructive feedback. Let alone from the majority of the group. This was one such occasion. The pretext to this discussion was as follows. Item 1 – We now have two scheduled sessions left before the Pius Chronicle is officially ended. Item 2 – Some of the players thought that the evening's scenario felt futile. Bear with me while I try to reflect on what was said.
Item 1 is something we all feel strongly. We have been playing for a while, and we all regret coming up on the end. That is only natural, and I wouldn't wish it any other way. There are however certain problems connected to this. Chief of these being, I believe, "how do we, as a group, wish that the last chapter in our collective tale should end." Achieving this, the perfect ending, if you will, is not easy. For it to happen, all the involved parties must feel ownership of the story being told, and achieving this gets complicated real fast.