My old notebooks, part I 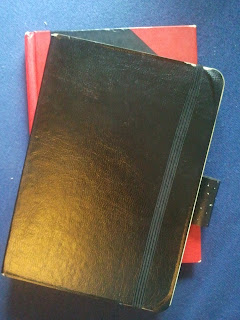 I'm almost done packing, and tomorrow I'm leaving Bergen. While I was going through my stuff, deciding what to keep, what to put in storage, and what to get rid of, I started leafing through some of my old note-books. I've been using them to plan my games for about a dozen years -- that is, until I started blogging, as now most of my writing ends up here. This time I've decided that I wont bring these tomes with me, but rather store them safely at my mum's.
However, there are a few pages in these books I'd like to preserve for posterity and easy reference. And I know a couple of my players will appreciate seeing some of these things again. Hence this post, the first of at least two, if not three. And since chronology is as good a system as any, I'll start with the oldest two. They measure 14 x 9 cm, and are the smallest of my books. They were in use between 1999 and 2002.
This map is from a homebrew I ran for my girlfriend at the time, Bjørnar (of Toadface fame), his girfriend, and a colleague of my GF. We were using the Storyteller system back them as well, and I think the game ran for a few months before it ended. I can't remember exactly what the plot was, but there was a goblin-invasion, that I'm certain of. 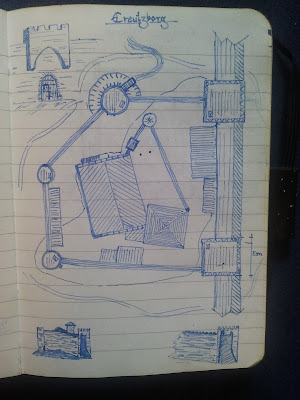 This is the main fortress from the city above. The two dots in the inner courtyard mark a couple of poles set up by some evil magician or some such. I may be wrong, but I think he was using them as a portal to get more monsters into the city. 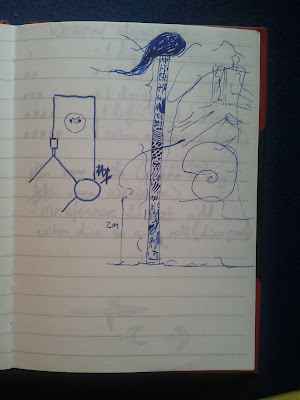 Here we have one of the poles. I seem to remember they were crowned with the scalps of many humans, and engraved with dark glyphs, as these things often are. 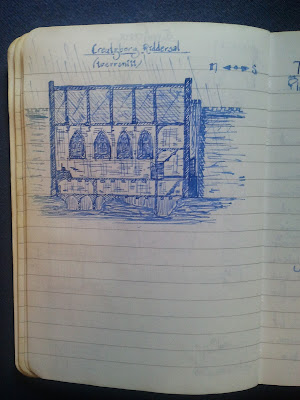 And here's a cross-section of the main keep. I have no idea why I drew this, but I think we had a dramatic confrontation in the great hall. 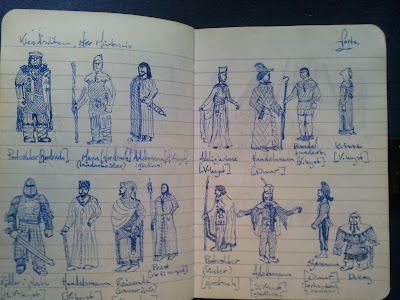 Lastly, a few sketches of people from Mürbruis, as this particular world was called. I think I also had some larger maps, but I have no idea where they've gone. I did run a few other games in this world as well, before it passed into the darkness of old campaigns and half-forgotten myths.

One thing I noticed while going through these old notes is that I drew more back then. I think I should make an effort to pick that up again, as it's heaps of fun looking at old drawings of places that never existed.