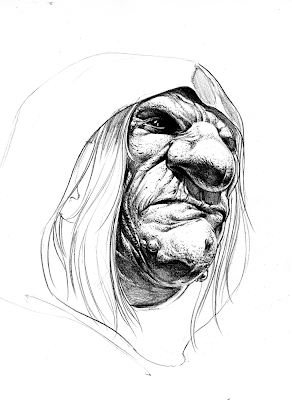 AARGH, feel the might of my fist, puny human!!
Storyteller's note: This is the third of the hero-biographies from the Pius Chronicles. It is written by Bjørnar, this character's player.

Toadface is something of an enigma and little is known about his life before he joined the adventures of the Pius Cabal.


What is known is that he was raised by his grandmother, both living alone in a cabin located somewhere in what is called The Wild. His mother died giving birth to him, and his father is unknown. The only things he inherited from his parents was his grim-looking face and his considerable bulk, though there is a possibility that the magical artifact called Thunderer's Gauntlet once belonged to his father.


It seems that magic has been a natural part of all his life, at least he can not pinpoint a specific moment when he awakened to magic. It might be that the circumstances around his birth made him an enlightened already at that moment. It is very rare to be born with the Gift, but it is not unheard of. It is also possible that his grandmother may have stirred the cauldron of fate a bit even before he was born. From the stories Toadface tells about his Grandmother, it is safe to presume that she was a Master of the Arcanum of Life and perhaps even other spheres of magick. It might be that she made sure that her grandson would one day take over her legacy.

Some parts of the arcane education Toadface recieved from his grandmother seems almost hermetic in nature. He has on several occasions proven a deep understanding of magical theory, even able to discuss the subject on a high level with both Van Zaar and several hermetic mages. On the other hand Toadface do not approach magick in a hermetic way, but instead uses old and primordial tools. Usually it involves trollsongs and potions made of different herbs, but he have also used self-mutilations and sex to focus his Arcane crafts. His magick seems often strange to the other members of the Pius Cabal, and because of this and his looks some of them even thinks he is not human. Instead they believe he is some kind of Cro-magnon, an early protoype of man capable of tremendous feats of strength. There is some truth to this theory, after all legends of the North tells us about Giants roaming around making trouble for the gods.

His life changed when William Blackstaff turned up on his doorstep, seriously wounded and hunted by some kind of demon sent by the Queen of Stars. After healing Blackstaff's injuries it was clear that it was not safe staying in the cabin. It is unclear at this point what become of his grandmother, but it seems that she already had been missing for a while leaving Toadface alone. He have never told anyone what happened to her, contributing only more to the mystery. The theories are many, but the most likely one is that she suffered a vicious paradox backlash, becoming a tree or some strange form of wildlife.

Blackstaff quickly decided to bring the young mage to the Pius Cabal, asking them to take care of him. Toadface have ever after had an ambivalent relationship with the young god. He do not trust him, nor any other god, taking their games with humans as an insulent. In the end the Hand of Fate promised to leave him alone, freeing Toadface to earn his own destiny.

Toadface was a valued member of the Pius crew giving them some much needed staying power in fights, both with his healing powers and his immense physical presence. His deeds where many but the greatest of them all was the healing of the dragon, making him one of few humans riding the ancient creature.


Toadface of the Forest of the Northern Wild
Also called "He who eats berries" and Toadchief
Master of first Degree, of the Arcana of Life.
Knight Proxima, strongest man on Argos and Dragon Rider