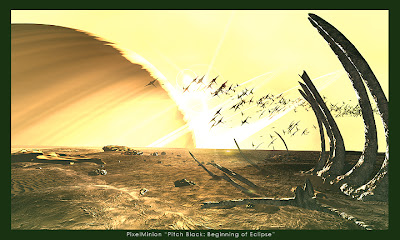 According to Joesky, I owe some tax, seeing as I'm prone to punch out rather lengthy posts every now and again. To settle that score, I give you the second adventure I've ever written. The first was 19 years ago, and not that big of a success. Hopefully this one isn't as bad.

Nightfall is an adventure for three to six players, using the Storytelling System. It is based on the film Pitch Black, but both scenario and plot has been modified to accommodate the chaos of roleplaying. I wrote it mostly as an exercise, but if you find it useful, I'd love to hear how it went. For that matter, should you have any comments, I'm all ears eyes.
Nightfall

Labels: Because I can, Joesky, WoD