The Chronicle of Mirryn

Mirryn Ertinween was a scholar who lived in the 1st Century after the Covenant. His contribution to the Erian culture was to write down some of the legends from the Second Age, and the most famous of his works is the Fall of the Enæïdùn.

The following is the original version of the legend, as it was written before three of the characters, Banzel, O'Connor and Van Saar, were hurled back through the mists of time forgotten to the days of the last battle. History got changed a little, and the 'new' legend is given in bold types. 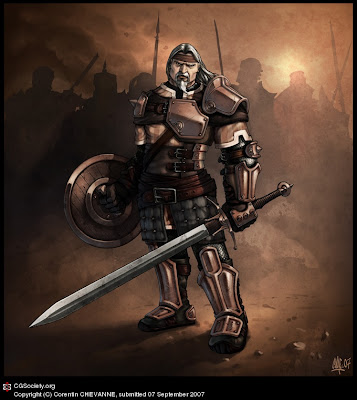 
In the second century of the Eighth Generation, the noble Enæïdùn was ruled by their king Gwyndell, the last in a line of kings hailing back to Arkon Aharimansbane, the great hero from the myths of the First Age.

When king Gwyndell refused to tear down the temple of the oracle Elendrine, Æthelmar of the Sardukar tribe, High Priest of the Temple of Rùinn, the Lady of Light, led a great army against the Enæïdùn. The goddess feared the visions of the Oracle, and she coveted the noble bloodlines of the Enæïdùn.

Æthelmar's army consited of the Seven Tribes of the Miurin Plain, all worshipers of sinister deities, as well as countless fell creatures from the Hinterlands. The blasphemous horde was so vast that it ravaged all fields within three days ride of its golden standard. Against it stood the King and his tribe, tall, fair-haired warriors all, the blood of the Ancients coursing through their veins.

Though the cause of the Enæïdùn was just, and their valour unrivalled in the Second Age, compared to the enemy their numbers were small; each Enæïd were met by two dozen foes on the field of battle.

Hard pressed, Gwyndell fell back to Dùn Cærwythen, the capital of his realm and ancient fortress of the Enæïdùn. Although offered a pardon, he refused, for he would not worship the cruel Rùinn. Rather than sacrifice the sons of his tribe on the altairs of the treacherous goddess, he chose to stand forever, untarnished, amongst the Heroes of Man.

In the darkest hour, three heroes came through the mist of time forgotten. They held great secrets of metal and fire, and they brought forth a mighty dragon.

The youngest son of Gwyndell rode the dragon Machina into battle, slaying scores of the enemies of reason before confronting the vicious goddess herself. Giving up his own life, he there slew the evil Mistress of Light.

The fall of Dùn Cærwythen to the Army of the Seven Tribes, and the massacre of the Enæïdùn, marked the beginning of the Second World War. In the centuries that followed, the World was drenched in blood.

Let the fate of the Enæïdùn, and that of their exalted king, whom we now revere as St. Gwyndell, remain an example. Noble death before bondage and a fate dictated by the whims of fickle deities. Let the fate of the young prince be remembered, for he gave his life in combat with the enemy who wish to enslave the soul of Man.

Let it never be forgotten: the shackles, broken, must never be reforged. 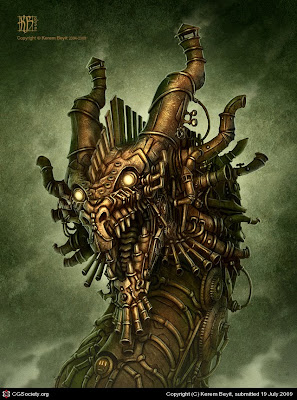