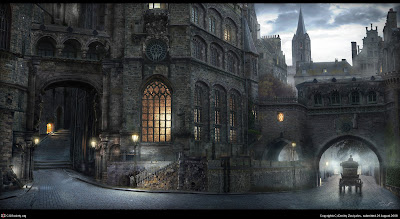 The world of Argos is like most worlds in that it has a good distribution of continents, and enough oceans to separate them. It has plains, hills, valleys, mountain ranges, deserts and all the terrains you’d expect to find lying about on a proper world. It also has elves and orcs, and humans of course. Were you to travel the world, you could take in the somber opulence of the merchants of the Wezelliche Syndikaat, the stately monuments and great buildings of the Three Houses of Parliament in Pendrell, and the magnificent Supreme Temple of Man in the Scythian temple-state. You could sail the currents of the Straits of Ahriman, visiting the ancient garrison city of the Knights of St. Invictus on the island of Cora, or you could brave the Outer Ocean, crossing the Kraken’s Deep (praying you don’t encounter one of the dreaded Black Ships) on your way to the Waymar Archipelago, perhaps visiting Freeport, where you could hobnob with pirates, spies, blackmarketeers and opportunists.

Alternately, you could brave the Orc-controlled plains and mountains of the Dark Continent, seeking lost temples and artifacts of lost times, or travel to far-away Cathay, the Empire in the Midst of Time. Of course, you could choose to go somewhere else entirely.

One of my guiding principles when creating this world was to make it recognizable and as easy to relate to as possible. The players will have to learn a myriad of names of places and persons, they will have to familiarize themselves with locations, customs and history, and they will have to be able to move around in the world. So I figured I’d do the only honorable thing. I’d steal, borrow and plagiarize. From anywhere and anyone, as long as I, or my players, like it. The thought is that if there is a pre-existing relationship, it is that much easier to deal with. And this again leaves more room to explore behind the scenes, and to draw abductive conclusions based upon what’s described.

Argos is very much like our world. The kingdom of Pendrell, for instance, is quite alike England, and you can find it close to where you’d expect to find England, were you to look for it. The Corinthian city-states, to take another example, are not unlike the Italian city-states, and they’re located appropriately. It is a world dominated by Man, and Man has all but rid the world of magic. The continent of Eria (hint: think Europe), is where much of the play has been based so far.


The Erian civilization has reached the Age of Enlightenment. We’re basically talking pre-Industrial Revolution. Printing presses, universities, banking systems, the lot. The Reign of Enlightenment is a little tenuous, mind you. The paradigm does not really allow for magic, fantastic creatures, or of wondrous phenomenons in general. The two lawful religions are the Cabal of Pure Thought and the Temple of Man Supreme, both praising Man as the rightful ruler of Creation, and both adhering to reason and rationality as the way to advance man in the great scheme of things.


It hasn’t always been like this, though. In the previous age, magic was alive, gods ruled the heavens, and Man and Elf shared the lands. Long story short (more on this later), in the Second World War, Man killed the gods, drove the Elf off his lands, and vanquished magic. This was about a thousand years ago, and now things are changing. Now magic has awoken, new gods have transcended, and the end of the world is imminent (nothing gets a game going like an apocalypse, right?). These days, the precepts of reason and rationality are being challenged by great powers, both ancient and new. More people are awakening to magic, dark cults are spreading, and the Orc, unified by a great Kahn, have swept over the colonies on the Dark Continent.


If I have to put a label on the setting, and as a relatively old-school roleplayer, I tend to do that anyway, I’d say it’s a low-magic, dark gothic fantasy. To put more labels on it, the rules are the new Storyteller system, and most of my current players play mages. A few more key words are intrigue, ascension, paradigm-war, Call of Cthulhu, Ars Magica, steampunk, etcetera etcetera…


Next: On the mythos.