A Short History of the Wezellian Syndicate 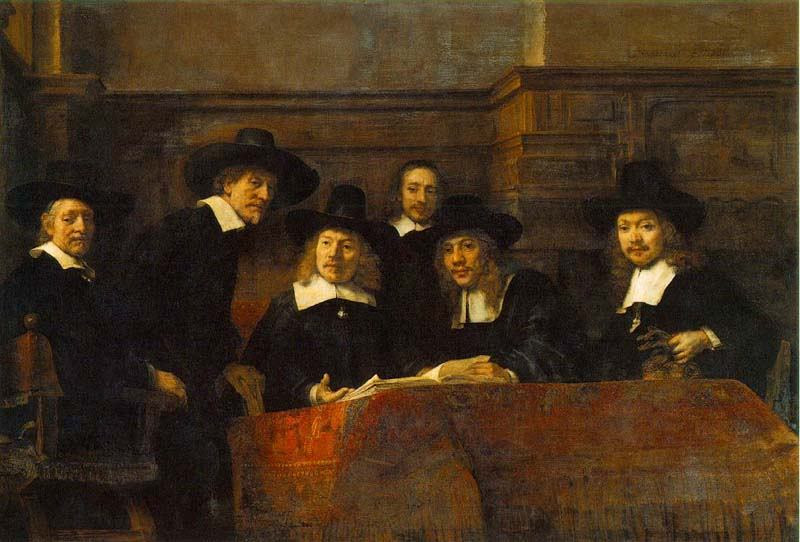 Portrait of the Syndics of the Clothmakers Guild, by Rembrant
Picture hosted by The Social Affairs Unit
Wezellian merchant houses have dominated the trade on the White Sea and the Inner Ocean for more than five hundred years, and today the Syndicate has offices in every major trade-port in the region. Wezellian merchantmen carries fur, honey and amber from the Principality, grain, wine and steel from the Skythian ports, stockfish and lumber from Livonia, wine and cloth from Corillia, and wool from Pendrell. There is even an office in the Hermetic port of Göteshafen, as well as on the far-away Waymar Islands. The Wezellian warehouses and stockyards are probably the best stocked in the World of Man.

The Syndicate was formed by the five largest Wezellian trading houses in YE 799 to represent and further the interests of their business. They chose an Ombudsman to speak on behalf of the Five in dealings with the king and the nobles, and were quickly able to reap the harvest of their investment. In fact, before the end of the following century two more houses had joined the Syndicate, and their Ombudsman had been given a permanent chair in the King's Privvy Counsil. The last house joined the Board in YE 963.


The nobles resisted the merchants's bid for power, but after Wezell's expensive war with the Princess of Gaffenmarch, YE 907-921, the Syndikate's position, after having bankrolled the endeavour, had become all but unasailable. Over the next hundred years the Onkels would be appointed to key possitions in the government, and the office of Ombudsman became more influential than that of First Minister.


Throughout the 10th Century, the conflict between the Onkels and the noble houses came to a boiling point. Having lost considerable influence in the war, a group of nobles under the Duke of Angermar set out to reclaim their possition through voilence and assasination. After decades of civil strife, the conflict came to an end in YE 987 when the entire family of the ageing Duke died when their ship disappeared. Shortly after, five key members of the Dukes conspiracy were arrested and sentenced to death on charges of treason. When the Duke died the following year the Syndicate had no opposition in Wezell.


The Royal House of Wezell suffered under three weak generations over the last century, and plummeted into debt during the years of the Angermar-conspiracy. The last of these monarchs King, Alphonse XIII, nicknamed Half-Crown, is most famous for his lavish feasts and his love of cards, as well as his dislike of politics.


In YE 1021 the dept of the Crown had reached such astronomical proportions that the Board of Onkels declared the Royal House bancrupt and dissolved the monarchy. The parliament, by now without any real influence, thereafter transferred power of government to the Board of Onkels, in effect making the realm of Wezell an extention of the Syndicate.