The Golden Ports of Saranassi 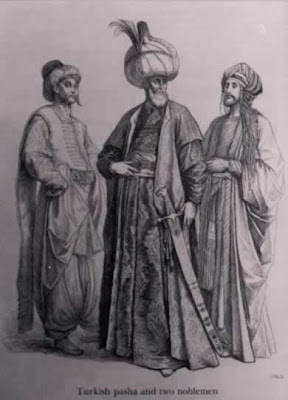 ~Arasani merchant and assistants~
[Picture from Costumes of All nations, 1907]
East of the Inbari Peninsula lies the Golden Islands of Saranassi with ports of coffe, sugar, and most of all silk. The trade in precious stones, pearls, spices, and beautiful works of gold and silver is also rich in these ports, and is surpassed by none. It is here we find the noble tribe of Aras, tall, crafty and golden-skinned. A thousand and one islands encircle the Sea of Pearls, all ruled by the Grand Sultan.


Grand Sultan Ahamet the Light of Conviction is not only rich as onkel; it is said by many that he fought with the prophet Aziz in the Battle of the White Tower, and that he is indeed one of the Awakend Viziers -- the mysterious cabalistic Azizinian order that rules the Hanumen.


The Grand Sultan rules from the Palace of Pearls in the magnificent city of Sirinagar on the emerald green island of Erentam. In this city, the roofs are made of gold and even the footmen wear silk. In its markets one can see wild and exotic displays, peruse wares from far away realms, and haggle with the Arasani. Be warned though, they are as cunning merchants as any in Creation.


After the loss of the rich harbours of the Colonies, the Saranassi trade has become increased to fill the Erian demands. As of this day next to five ninths of all Wezellian silk import hails from the Golden Islands, further three sevenths of the coffe bean, and four thirteenths of the sugar. For most of the remainding trade, merchants rely on the Waymar ports.


For almost three centuries now there have been Wezellian offices on the Golden Islands. Even though all foreign commerce is strictly controlled by the Grand Sultan, the tradesmasters and captains who have plied this route have made healthy profits. There are currently five Wezellian houses running trade off the Golden Ports, the newest of these being Ferner-Smaal. This young house only became involved in the region as recently as YE 1017.


The Tradesmaster has become informed that due to certain developments, the named tradeshouse is in the process of opening two new offices in the Golden Islands. One need perhaps not explain why this makes the purchase of stocks in this venture good business. It can also be expected that many others will follow suit within the end of the year.