Chapter I: The Rise of the Skythian Empire 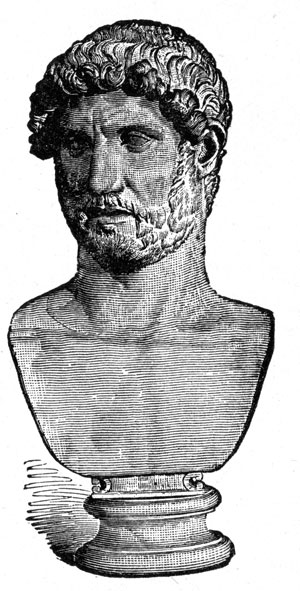 ~Emperor Markelin Elfsbane~
[Source: Karen's Whimsy]
THE SKYTHIAN EMPIRE rose from the smoldering ashes of the Erian Empire. The latter, having been torn asunder by centuries of religious strife and tribal conflict, finally collapsed after the imperial capital Apeloni was burned to the ground by the Cult of Xuul.


The powerful Skythian tribe now came to dominate the Hegemony of Man, as the regions of the Erian Empire had become known. From their stronghold in the highlands of northern Corinth they quickly gathered the pieces of the broken empire and put them back together again.


In a campaign that lasted more than five years, the first of the Skythian Emperors, Flavus Pentagenal, eradicated the Cult of Xuul and placed the Corinthian tribes under imperial jurisdiction. He also made the Cult of Man Invincible the state religion, greatly helped by the deicide, and following sainthood, by his adopted son, Ares Demagos.


Even with religious unity, the young empire was wracked by internal conflict as tribal rivalries quickly started simmering again. Emperor Flavus's death, twelve years after he was named Princeps Optimus, almost ended the imperial dream in it's infancy. As he lay on his death-bed, being wounded in the battle of Amanervo, he named one of his generals, Germino Atathron, his heir.


Emperor Germinio proved to be a wise and just ruler, and his seventeen years at the helm of the Empire was marked by peace and prosperity. New areas of land was brought into the fold, and roads were built to connect every part of the Empire to the rest. He also made an alliance with the martial Penderii.


The lands of the Penderii bordered the Sielwoode, an elven realm in the middle of the Erian mainland. The tribe had long been in a state of perpetual war with the elves, and few at the time doubted that the alliance would plunge the Empire into war. Still, it would take seven years before this came to pass.


Emperor Germino died shortly after the alliance was signed, and his son, Vevio Cathago, took the purple. In his treatise on the Skythian emperors, Mirryn accuses Vevio of poisoning his father. Immediately after his instatement, the young Emperor started a purge of real and percieved enemies. Amongst those targeted were both politicians and generals. The latter would prove to be his undoing, as this left the legions under the command of men who's chief merit was their allegiance to the Emperor.


When the elves finally attacked, the legions on the Sielwoode border were quickly overrun. A large war party also attacked and razed three of the forts in the Elfswall Mountains. In one fell swoop, the Elf had crippled the Empire's legions, and now stood poised to strike at the Imperial City.


Emperor Vevio panicked fled the capital with his mistress, leaving the Empire without effective leadership. According to Sertino, he was later killed by one of his guards.


In this time of peril, Markelin, the son of St Ares, seized control of the chaos. When Vevio's purges began, Markelin had gone accross the Straits with a band of loyal followers. When he returned, he had stayed out of the Imperial City, but as soon as the crisis began, he stepped onto the stage.


Markelin ordered the Invictus Legion to close the Elfswall, and then marched to the aid of the Penderii with twelve Corinthian legions. In the three years long campaign that followed, the elven host was driven back into the forest, and the border finally fortified. By now, the legions had named Markelin Emperor, and the king of the Penderii had sworn him allegiance.


Understanding that peace between Man and Elf could never be lasting, Markelin ordered that each week a verst of forest be burned or cut down. Despite a decade of fierce skirmishing along the receeding forest-line, the massed might of Man proved too much for the non-humans. When Markelin, now named Elfsbane, died after thirteen years on the throne, he left the Skythian Empire stronger than ever before.


It would take a century of internal unrest and religious conflict, and another elven incursion, before the Empire again renewed its efforts to cleanse the lands of the elven scourge.