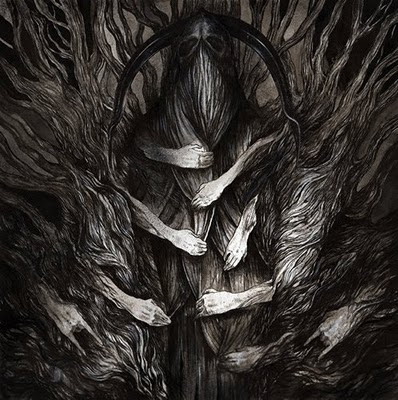 In this post I will lay down a few more pieces of that nefarious puzzle that is the dark arts of the Nefandi.


These fell glyphs are etched into the flesh of the bearer, using a special ink made of the ichor of an Abyssal entity made manifest. The Gift enables the mage to create these nefandic tattoos, and the maximum number of spells that can be carved into the flesh of a subject equals subject's Stamina. If the subject is Awakened, such spells does not count towards the maximum number of spells that can be maintained. If the subject is a sleeper, normal rules for disbelief apply.


Each carved spell causes on point of Lethal damage to the subject, and duration is determined as per spell description.

The spell creates a temporary pocket realm, akin to a bubble, which is transported to the Abyss. The Gauntlet will be strengthened, and all connections to the Prime Material Plane will be severed. The area will be contained within this bubble as long as the magician maintains concentration.


Any beings within the spell's radius can escape from becoming trapped within the area of effect by rolling Composure + Gnosis against the caster; the target number is 10 successes -- once the caster reaches this number, those who have not are trapped within. Treat the area within as a Dead Zone (see M:tA p. 230), the Gauntlet as having Strength 5, and all magic cast inside take a penalty equal to the caster's dots in Abyss.


Should the Nefandi relinquish the spell while the bubble is still immersed, any beings within will be left in the Abyss. If they are incapable of navigating this dark and horrible realm, they may become forever lost. Rules for travelling in the Abyss apply.


Abyssal entities are drawn to the life and light of magicians and mortals, and will seek to consume anyone who enters their realm. The Nefandi may also summon such entities, either in advance, or after the spell has been relinquished.


Any material items left exposed to the Abyss will sustain 5 points of damage per round exposed.


Rote: Immerse the Fallen World
Dice Pool: Resolve + Occult + Abyss
The Painted Man is known to use this rote as a trap, thus making sure that if he is attacked, his enemies will stand face to face with the Eternal Darkness. This rote enables him to ensure that if his concentration is broken, he will have the means to escape without harm.


New Morality:
Corruption
Whereas every human of the Book of Worlds -- be it Sleepers, Awakened, Garou, or of any other derivation, all cling to that which makes them human -- those who embrace the Exarchs have no choice but to abandon their humanity. Not to do so would cause their sanity to shatter, and they would become devoid of all sense and reason; in effect, their soul would become lost in the Void. Many are the madmen who's minds could not deal with the merciless truths of the Old Ones. Thus those who truly worship the Things That Must Not Be walk a different path than the rest of the living. Theirs is the path of Corruption.


As with Humanity, also Corruption has thresholds of insight and devotion, a ladder of sins if you will. To shed one's Humanity and give oneself over to the taint, the Humanity must first be reduced to 1. Thereafter the character must sacrifice one point of Willpower, and purchase the first dot of Corruption at a cost of (new dot x 3) XP. The rules for losing and increasing Humanity apply (WoD, p. 91).


Corruption
10....Feeling remorse
9......Showing compassion
8......Missing a sacrificial rite
7......Following your own interests
6......Failing to corrupt or destroy another being
5......Failing to corrupt or destroy an Awakened
4......Passing up an opportunity to increase your power
3......Allowing another to work against the coming of the Exarchs
2......Not actively serving the will of the Exarchs
1......Attempting to hinder the Exarchs from coming into the world