Who is Solomon Kane? 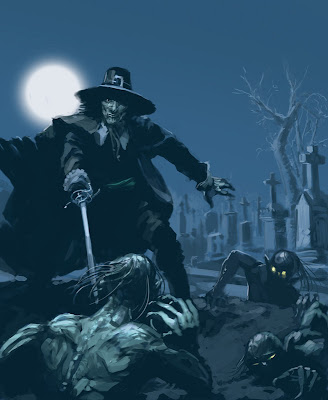 "A tall man [...] clad in black from head to foot, in plain, close-fitting garments that somehow suited the somber face. Long arms and broad shoulders betokened the swordsman, as plainly as the long rapier in his hand. The features of the man were saturnine and gloomy. A kind of dark pallor lent him a ghostly appearance in the uncertain light, an effect heightened by the satanic darkness of his lowering brows. Eyes, large, deep-set and unblinking, fixed their gaze upon the bandit, and looking into them, Le Loup was unable to decide what color they were. Strangely, the Mephistophelean trend of the lower features was offset by a high, broad forehead, though this was partly hidden by a featherless hat."

"He never sought to analyze his motives and he never wavered, once his mind was made up. Though he always acted on impulse, he firmly believed that all his actions were governed by cold and logical reasonings. He was a man born out of his time -- a strange blending of Puritan and Cavalier, with a touch of the ancient philosopher, and more than a touch of the pagan, though the last assertion would have shocked him unspeakably. An atavist of the days of blind chivalry he was, a knight errant in the somber clothes of the fanatic. A hunger in his soul drove him on and on, an urge to right all wrongs, protect all weaker things, avenge all crimes against right and justice. Wayward and restless as the wind, he was consistent in only one respect -- he was true to his ideals of justice and right. Such was Solomon Kane."

Both quotes are from The Savage Tales of Solomon Kane

, by Robert E. Howard. The first is from the short-story Red Shadows, the second is from The Moon of Skulls.