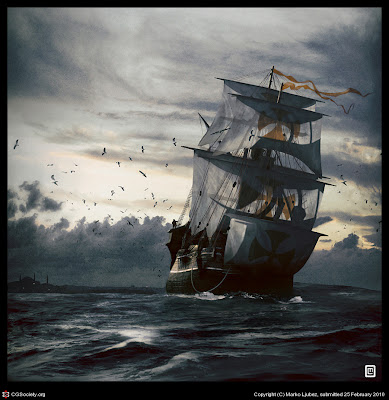 After having destroyed the OUT base Fort Niebelungen, the cabal decided to anchor in the Hermetic port of Göteshafen. As this is probably the safest port on all of Argos, and since the crew of the Pius haven't had a proper shoreleave in months, they were allowed ashore for the night. The cabal meets a new patron, haggles over the price of Mana, and enjoys a night on the town before setting sail again.

~o~
After having secured the ship, the magicians headed for the castle, where they were received by the Burgmaster of Göteshafen, the circumferous Master Vermis Ludenius. The beginning of the meeting was dominated by some hard bargaining, but once the formalities had been dealt with, Vermis placed a bottle of Grot on the table. Thereafter the mood lightened, and talk flowed freer. And so, when the cabal finally left the Hermetic's sanctum, they had begged a few buckets of Vis, purchased some information, sold some notes, and traded apprentices.


One of the facts their host threw on the table was that just before they came into port, he had been informed that the capital of Livonia had been hit by a similar explosion to the one in Rederhafen.


They also tried to sell the mysterious black metal ammunition they had taken off a Hellghast on the Dark Continent. After it had caused an illness that nearly killed Bansl, it had been stored in a lead box under lock and key. Now that they tried to move it, they found that the lead had all but withered away, and when the box was lifted, the bottom fell out. The Hermetics could tell them that this was the Abyssal metal called Shardakeem, and that it could not be destroyed by any known means.


As they still had to wait until the following day, the magicians then decided to enjoy the local night life – they found themselves an inn. Still half cut from their meeting with their new friend, the rest of the evening proceeded to be a proper party. Harsh words were exchanged with some of the patrons, Simon was informed of his new position, and Toadface got lucky.


During the evening, they were contacted by Onkel Smit, and in a telepathic conversation received information about a White Reaver having been spotted over the Skythian plaguelands.


The following day they woke with various degrees of hangover. Toadface, being an Adeptus of the Arcanum of Life, had by now become the de facto doctor on board. His first act was to make sure that the crew's meals were properly balanced, and – perchance spurred by his own excertions the night before – decided to start a regimen of physical exercise on the ship. Thus it was that when van Zaar came on deck with his morning coffee, he found the entire crew, officers and magicians included, lined up on the foredeck doing gymnastics.


Later that day, Master Ludenius graced the cabal with a visit on their ship. He had actually taken of his valuable time to have his sedan take him to the docks. He came with more Vis, and with his apprentice, Rupertus Ludenius. After another pleasant meeting, they all shook hands, and the rotund Hermetic insured the cabal that it had been an exquisite pleasure doing business with them, and that they were most welcome back at any time.


Thereafter the Pius was escorted out of Hermetic waters by the galleas Apprentice Markator, and to a seven gun salute, they rigged the great balloon, and flew off to new adventures.


The cabal had come to realize that they still needed to gather more intelligence about their enemy, and so, while they were debating how to proceed, Captain Galan decided to try his hand at navigating along ley-lines. The first way-point was the Tass-mines of Hammer's Hold, in northern Livonia. They last visited this location on one of the first nights of YE 1022, when they reclaimed the Dragonheart from Magnus Emil af Borg.


The former, originally constructed by Bansl in the smithy of the Enæidùn on the night before the battle with the sun-goddess, when the cabal was hurled back through the Mists of Time Forgotten. The latter became the sworn enemy of the Pius Cabal in general, and Captain Galan in particular, when Galan broke into his castle and emptied it of Tass.


They also discovered that the keel of the Pius was able to crystallize Tass when it passed over a Hallow.


After Hammer's Hold, the course was set for the Island of Man, once the site of a Watchtower, then the location of the great University of Man, now swallowed by the Elvenwoods that covered large parts of Pendrell during the Scourge of the Frost Elves last winter.


When the Pius emerged from the Between, flying low over the now forest-clad hills of Glencaellyn Moors, Galan scryed ahead, and found the Island of Man scoured off all vegetation. The hungry forests surrounding Lake Meryth were kept from reclaiming the island, and two teams of men with weapons spewing fire were seen burning vines and saplings along the small island's shore. Where the walls of the university had crumbled, steel towers had been erected, and where the Chapel once stood, a large metal tower was being constructed. Above the compound the red flag of the Ordo Ultima Thule flew like a blasphemy.

Storyteller's note: This was one of these nights where nothing epic happened, but tons of good roleplaying was done, and good times were had.
I also finally got to introduce Master Ludenius. He was originally my PC in the Ars Magica game Leketoys ran five or six years ago. He was never very good as a magician, but amongst mundanes he was king. Back then he became the financier of the chantry, and mostly left the Arts to those who thought themselves fit for such matters. Another character from that game has already been introduced, as another Master of the Order. That one, Lucius Severus Septimus, was played by Theurge Tito's player.
I'm also still playing with the format of the chapter-posts. I think I'm starting to get satisfied. Let me know if you have any thoughts on the matter.