"No pestilence had ever been so fatal, or so hideous. Blood was its Avatar and its seal --the redness and the horror of blood." ...
E. A. Poe, The Masque of the Red Death 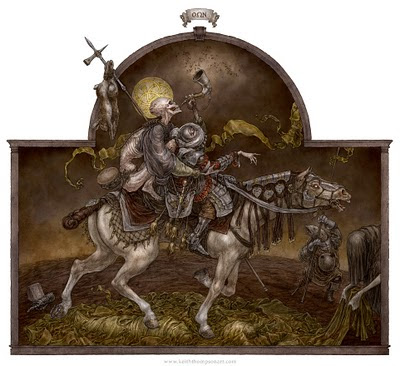 In the beginning of YE 1022, the Red Death came to Eria. It is not known from whence it came, but the first outbreak was in Rederhafen. Despite the rapid containment of all infected, and the subsequent purge of the quarantined  area, the plague spread. Throughout the spring and summer more and more cases has been reported, and even if local authorities have reacted quickly and decisively, the Red Death has penetrated deeper and deeper - at the end of summer, there were dozens of quarantined towns and parishes in the western Empire.


When the War of Enlightenment broke out, the plague got a new wind in its sails, for such is the way of things; Plague thrives in the wake his sister Famine, and Famine stalks her brother War like a spectre. While the Host of Man and the Army of Enlightenment have wizards and warlocks to protect their soldiers from the Red Death, the countryside of Raden, Armüden, and Volgraw-Ersteigen are now ravaged by hunger and pestilence. 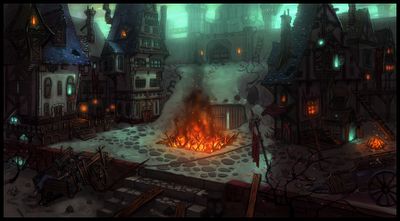 Emperor Constaninius Ada of the Enlightened Skythian Empire has ordered all those infected to be put to death and burned together with their possessions, and in some cases this has led to whole towns being sealed off and set afire. Additionally, trade with areas touched by the Red Death has stopped completely, and many places bridges have been torn down to keep anyone from crossing the rivers, city gates are closed, and barricades erected in the streets. Such is the paralysing grip of the fear of the plague that even in the eastern duchies people are refusing travellers entrance to towns and houses.


Still, despite these precautions, with the rapid spreading of the plague, and with the chaos and strain on manpower caused by the war, whole regions are now controlled by the infected. 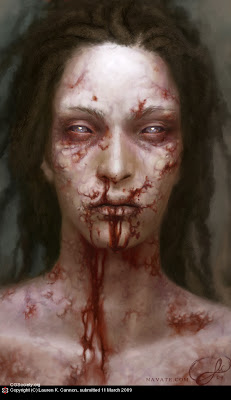 The Red Death spreads from person to person, usually via bite. Its name stems from the first stage of the disease, because victims will display painful red lesions. These start in the area around the infected wound, and spreads within a day to cover all of the victim's body. The next stage is marked by profuse bleeding from all orifices. Normally this stage also brings with it a sense of elation and happiness. Within hours the disease enters its third, and, it is believed, terminal stage. What sets the Red Death apart from the Common Plague is that once the victims die, their bodies will not only keep moving, but actively seek to bite non-infected humans.


Doctors believe that the infection is caused by a thaumatological contamination of the phlegm that carries over to the blood. This will in turn cause the heart to decompose. Once the incubation period is over, the body will purge itself of the putrid blood, making the only fluid left corrupted phlegm. The victim's soul will by now be so weakened by the thaumatological infection that it cannot free itself from the dying corpus, and so it becomes trapped in the flesh as the body dies. 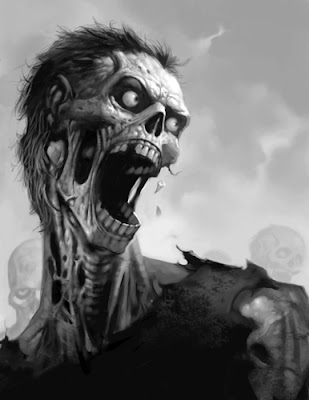 Once the victims have reached the state of undeath, all semblance of their former intellect or personality is forever lost. All that is left is a ravenous hunger for living flesh. While there doesn't seem to be any form of communication or organization amongst these hungry dead, they frequently form  roaming packs that will enter a frenzy if they should come across the living. This is also the most common way for the plague to spread from place to place.


Some scholars hold that these famished corpses seem to display a hatred towards those who are alive, whereas others deny that they have any emotional capacity whatsoever. There are also those who claim that while the walking dead themselves have no consciousness, they are guided by what has been called Plague-herds - mortal men serving some demonic entity. Evidence supporting this theory was indeed put before the Enlightened Congress following the early outbreaks.

The best way of destroying these undead is by fire, but decapitation will also cause the trapped soul to escape, thus rendering the corpses inanimate. The danger here is that any fluids from such cadavers appears to have the power to carry the infection, so great care should be taken, lest it comes in contact with an open wound. Luckily they are not immune to all laws of nature, thus the flesh will putrefy and rot away at normal speed, and eventually their bodies will fall apart.


Storyteller's note: It is about time I do a write-up on the zombie-plague. After all, it's been marinating in the setting for a good long while now. If a herring is left untended for too long, it'll go off ;) I owe thanks to Matt over at Carpallymotivated for inspiring me to finally write this one, with his post The Plague. Not only did his artwork set my brain to work, but I can only agree 100% with his sentiments on the topic.


Speaking of art, as usual you can click on all the pictures to biggify them. I think you should.


Also, you may have noticed that I've been hammering out a few more posts than usually lately. That has all to do with my bitch of a back. Since Friday I've more or less been tied to the bed, but thanks to a cocktail of marvellous drugs, I'm rapidly improving, and should be ready for play on Thursday. I probably wont make it to work until next week though. Oh, well. Such is life.