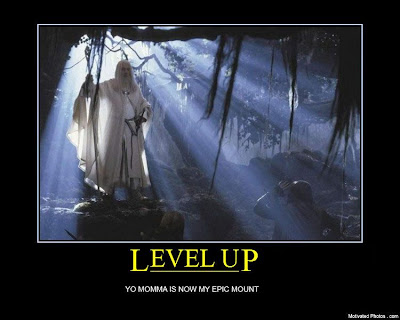 According to the Sorcerer's Skull, The Book of Worlds is now a 5th level blog. 40 followers. That is exactly 6.66 times more than I thought I'd ever get when I started this blog in August 09. The fact that so many people are reading my ramblings is both baffling and humbling, and I am very grateful to all of you who stop by, both regularly and occasionally.

When I registered the Blogger account, my intention was to have a way of making background info available to my players, and before that I had tried a couple of less versatile platforms. Amongst other things, there is a Google group out there with a few early documents on the world of Argos. Then I found the blogosphere. The first follower I ever got that I didn't know personally was Shane Mangus from Swords Against the Outer Dark. Since then, a new icon has appeared under the Readers header every so often. I haven't said this before, but know that I appreciate you stopping by very much.

While The Book of Worlds was meant as a strictly in-house communication platform and data-base, it has evolved since then. I now look at it as a resource site, especially for myself, but also as a part of a multi-user, self-publishing, peer-to-peer hobby-magazine-thingy. I publish my stuff, and I read a bunch of other posts every day, and I am very excited to be a part of such a creative and informal society. It's like Dragon and Dungeon  Magazine, in the future! It has also opened a new aspect of storytelling, as I'm now able to plant plot-hooks and red herrings, as well as provide setting-information without taking up valuable time at the table.

One thing I've realized is that most of the people reading my blog are grown-ups, and most of the blogs I read are written by grown-ups. Some play the same games they did when they were still geeklings, while others now play whatever strikes their fancy, yet others have found their Game and faithfully stands by it, be it a homebrew or an interpretation of a straight-out-of-the-box setting. All of them have the love of the game in common. For my part, I started playing AD&D 2 Ed in -91, back when I lived in a secluded part of the world, long before I became hooked up to the internet. In the years before, the Wall had come down, and and in those days an empire was toppling.

This was also the same time that I got a conscious relationship to music. For me that began with the Black Album. Now, nineteen years later, I'm still playing, and I still think the Black Album is one of the greatest albums in history. The following video is from that same year, when Metalica played in Moscow. That, ladies and gentlemen, is a piece of history.

Thank you ever so much for stopping by, and you are most welcome back at any time. Leave a note if you will, and if you have any questions, please do not hesitate to ask. I will try to answer at the best of my ability.