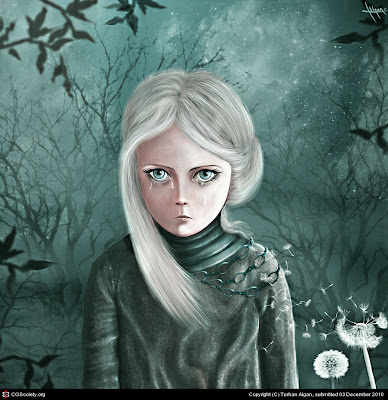 Hanna woke up, cursing herself for having fallen asleep. She had no idea how long she had slept, but it was dark outside the hovel. She was still desperately tired, so she figured it was still the same night. Then again, she was always tired these days. How long was it since she last slept in a bed? Before she fell asleep, she had been crying like a baby because she had been thinking about her family and the large house they had lived in. She now distracted herself from that foolish thought by checking her possessions.

She counted the biscuits she had left. Eleven and a half. If she only ate three a day, she would have enough for almost four days. The thought of how proud her father would have been of her, for doing the numbers in her head made her eyes sting. She shook the painful memory away and wrapped the food back up in a stained tablecloth. She had one pistol, five bullets, more than enough powder, and a blanket. She checked to see if the powder on the pan was dry. Her father had thought her how to load and shoot a gun before they got him too.
Again she managed to keep the tears from flowing. She was not a little baby! She was almost twelve, and if she started crying, she wasn't sure she would be able to stop before she fell asleep. And she couldn't afford to sleep again. At least not here. She had to keep moving. She put the biscuits inside her blanket, rolled it up, tied a piece of rope around both ends, and slung it across her back. At least she had good shoes.
Outside it was raining, and the new day was barely visible as a dull, grey band low on the horizon. "Keep the morning on your left." That was the last thing her father had told her before they got him. That was how long ago now? Three days, she thought. If there really was a Yellow King, and if she could find his Sanctum, she would have food enough to get there. If she managed to keep walking fast enough. If they didn't get her too.
---
The farm looked deserted, but Hanna knew that sometimes they were cunning and hid inside the houses. She would have gone around it, but there was a well there, and she was very thirsty. Last time she drank was yesterday. If only she could find a bottle. She had one before, but she had had to run when they got her father, and she had fallen. The bottle had broken, but luckily she didn't cut herself.
She checked her pistol again. It had rained last night, and she hadn't been able to find a dry place to sleep, so she cleaned it and reloaded it again. "Always make sure your powder is dry," her father had told her, and, "aim for their head."
She waited for a long while, watching the houses carefully. Somewhere to her right black smoke coiled slowly upwards.
---
Hanna counted her possessions. She had four biscuits, one pistol, five bullets, plenty of powder, a blanket, and a bottle. She checked the powder in her pistol and tucked it into the rope she used for a belt. She rolled everything else into the blanket, tied it up, and hung it across her back. She had slept a little she knew, because the sun was getting up. "Keep the morning on your left," her father had told her.
At least she had good shoes.