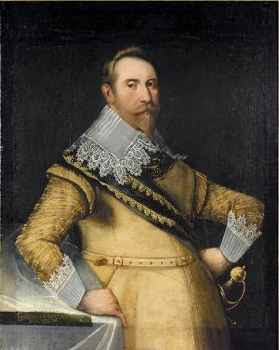 Master of the Arcana of Prime, Duke of Westerfold, Lord General of the Enlightened Army, Protector of the Truth, Consul of the Northern Realms, Marshall of Livonia, Baron of Höfenstahl, Viscount of Drang, Ritter af Borg and Helm's Hold. Thus runs the list of titles held by Magnus Emil. While of noble birth, his inheritance was no more than the old, though lowly title of Ritter af Borg, and a couple of estates in north-western Livonia.


Born in YE 995, as a boy Magnus Emil proved to be an exceedingly bright, although hot-headed child. He took to reading as a Wezellian to counting coins, and he also quickly astonished his father with his prowess in the martial disciplines. Magnus's father, Gustaf Emil, Ritter af Borg, believed that the Fates had a plan for his son, and on Magnus's seventh birthday, he took the boy to a soothsayer. The old crone foretold that Magnus would bring the Chained God back to Argos, and that he would grow to be feared by his enemies. To his father this was all he needed to know, and thereafter no expense was spared to make Magnus ready for his destiny.


The men of the Borg family have been members of the Knights of Angermar since time immemorial, and Gustaf Emil was no exception. He now called upon all the resources his family and the ancient fraternity could muster, for at last their goal of awakening Bolgen was within reach. The best teachers were hired, and and as soon as Magnus came of age, in YE 1015, a commission in a Livonian mercenary company was purchased for him. And so his military career was begun fighting in the Corillian War. His Awakening came shortly after his arrival in Corillia, and after having fought for six months, he needed to seek new horizons.


The following year he spent travelling the world, visiting Southern Eria, the Western Isles, and the Hannuman Caliphate. He arrived in the Caliphate as the War of Fate erupted, and he quickly lent his sword to the cause of Aziz. For the duration of the war, Magnus fought with the Mujahed against the Army of Light, and in YE 1021 he commanded an artillery unit at the Battle of the White Tower. It was in this battle that Grishnak, the fallen Daeva, was slain by Morfeus, the Prince of Nightmares, and when the Daeva fell, the surge of power caused mass Awakenings. Magnus, allready Awakened, came away with a new fire in his soul.


When he returned to Livonia, he found that his father had passed away and that he was now the Ritter af Borg. He set to leading his estates with an energy and a focus that soon made him a leading figure in the politics of the realm, as well as within the Knights of Angermar.


Shortly after his return, he discovered a rich Tass-vein in the old mines of Helm's Hold, and his bid for power was funded with the profits from these mines. In his journeys he had also come across an artifact of great power, the Coeur de Dracon, and its power was harnessed to open new and deeper shafts. During this work he found a forgotten passage to Hardhagrav, the tomb of the Chained God. With the ultimate goal of the Knights of Angermar now within reach, they rallied behind Magnus Emil, and the work to finally free their god was begun. This work was interrupted in the first days of YE 1022, when the Pius Cabal stole the Coeur de Dracon, as well as a large amount of Tass.


Still, despite this setback, the Ritter af Borg continued to prove himself to be a dangerous and ruthless politician, and more than one opponent passed away under mysterious circumstances. In Eria the Great War had by now become a reality, and in Livonia Magnus strengthened his power-base. When the Arcane Congress was convened in Wezell, he attended as the Grand Master of the Knights of Angermar, as well as the ambassador of the Kingdom of Livonia.


Since the War of Enlightenment began in Sextum, YE 1022, the Lord General has led his forces deep into the Empire, and he is now gaining a reputation as the greatest war hero of this age.

Weapons
Enchanted broadsword -- dice-pool 12
Dagger -- dice-pool 9
Hannumani flint-lock pistol x2 -- dice-pool 9, clip 1
Storyteller's note:
Magnus Emil is a sworn enemy of the Pius Cabal in general, and Captain Gryff Galan in particular. Despite that the cabal managed to obtain an amnesty for all crimes committed before the Arcane Congress, Magnus Emil has not forgiven, nor has he forgotten.
[Picture source: Listverse]