In this edition of the Historical References I will shed some light on something that is a distinct possibility in the near future of Argos.


Plague n. - A widespread affliction or calamity, especially one seen as divine retribution, or a highly infectious, usually fatal, epidemic disease; a pestilence.

The Norwegian legend portrays the Black Death as an old crone, walking from house to house. She carried a broom and a rake. If she used the broom, everybody died; the rake left some alive. Some houses she passed all together.

Typically, plague refers to the bubonic plague, but any rampant epidemic (if it meets the out of control body-count requirements) may be called a plague. Other diseases that have carried the plague-label include smallpox, typhus and cholera.


Poor sanitary conditions, limited medical knowledge and dense population made Medieval and Renaissance cities ideal stomping grounds for all sorts of infectious diseases. The plagues were not alone. 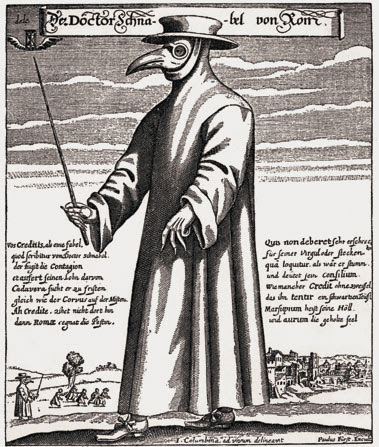 Picture hosted by: Boston College Magazine
London, as well as most major cities, was hit by plague repeatedly, and the following quote is from the Wiki about the Great Plague of 1665-1666 that reportedly cost the lives of about 100.000 people. Note that at this time the population of London was about half a million.

Plague doctors would traverse the streets, diagnosing victims, although many of them were unqualified physicians. Several public health efforts were attempted. Physicians were hired by city officials, and burial details were carefully organized. But panic spread through the city, and in the fear of contagion, people were hastily buried in overcrowded pits. The City Corporation ordered a cull of dogs and cats - a poor decision, since those animals kept the population of rats (the real culprits) in check. Authorities ordered fires to be kept burning night and day, in hopes that the air would be cleansed. Substances giving off strong odours, such as pepper, hops or frankincense, were also burned, in an attempt to ward off the infection. London residents were strongly urged to smoke tobacco.

The treatment of the patients were unfortunately both primitive (seen from our perspective) and largely inefficient. Apart from burning of fragrant herbs and smoking tobacco, other established remedies ranged from carrying lucky charms (rather harmless), to coating the victim in mercury and placing them in the oven (more often than not fatal in itself). Modern medicine holds that 50% to 90% of patients afflicted with bubonic plague will die unless treated, its cousin, the pneumonic plague, boasts a death rate of almost 100%. 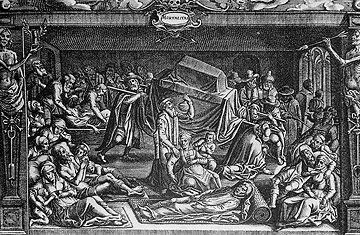 Victims of the plague during the 1574 Siege of Leiden.
Original source unknown.
Plague was not only a disease, it was a great and constant fear of our ancestors. Yet another of those hard facts of life. If the Plague came to a house near you, the odds were good you'd die. But it was also an early weapon in biological warfare. Hittite texts tell of victims of plague being driven into enemy lands as early as 1500-1200 BC.