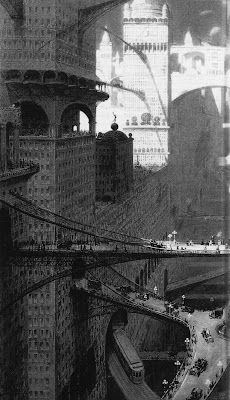 Corregidor was constructed and tethered among the stars with the help of a device called The Antikytheron. This apparatus formed the core of what has become the Great Machine. From the very beginning, it was able to not only maintain the position of the construct, but also calculate several possible outcomes of a particular course of actions. Ever since the beginning, it has been relied on by Corregidor’s rulers to predict the future and track resource developments, as well as a wide array of other prognostications.

As Corregidor grew from a royal palace floating in space to the manmade city-world it is today, its people colonised and settled dozens of other worlds. Its hunger for resources is insatiable and the Commonwealth is constantly combing the far reaches of the hinterverse for asteroid and new worlds to drain of minerals and other resources. At least one planet has been so stripped that it is now an inhospitable desert.

Though the Commonwealth began as a monarchy, developments in the third century after its founding changed that. At this point, a series of kings had taken to running Corregidor and the first colonies as a personal fiefdom, referring to themselves as Kings of the Stars. They had amassed enormous wealth and cracked down hard on dissenters. With life among the stars already being one where the smallest of margins could wipe out an entire settlement, the callous opulence of the kings caused a great deal of friction. Eventually, in the sixth year of King Nebulon the Mad’s reign, the kettle boiled over.

The king had begun the construction of a grand palace and had ordered all the colonies to double their already draconian resource quotas. To make room for the foundations, he had also decreed that all inhabitants of Corregidor who was not actively labouring on the construction was to be shipped to the labour colonies. The prognostication of the Antikytheron was that upwards of a third of the entire population of the kingdom would perish as a direct result of the construction. The king had exiled or killed all but one of the custodians of the machine. This woman, Boudica Iceni, bribed a captain to take her to Vermillio, the largest of the colonies at the time. Here she sought out Lord Solenoid and told him of the predicted outcome of the king’s actions.

The rebellion spread like fire on a grain-ship and within weeks, the royal legions on Vermillio had been overrun. The resulting war was brutal and bloody, but within five years the rebel forces, at this time calling themselves the Commonwealth, had beaten the loyalists all the way back to Corregidor itself. In the final battle, King Nebulon attempted to set fire to the sacellum that housed the Antikytheron but was cut down by the commander of his guard before he could plunge the future of his people into darkness.

Once their enemy had been defeated, the leaders of the revolution convened in the ruins of the half finished palace. The war had brought their civilization to the brink of collapse. Thousands had died in the fighting and many more had died of disease and starvation as ships and resources had been commandeered for the war effort. Boudica, the only custodian of the machine left, presented a prognostication to the council wherein the Commonwealth could rise from the ashes of the kingdom and claim the stairs for humankind. There would never be a king again, instead, the people would be ruled by a parliament who would base all major decisions on the Antikytheron’s prognostications.

Over the following millennia, the Commonwealth has grown more powerful and prosperous than any other civilization in the Multiverse. As new worlds were discovered and colonised, it was inevitable that they would discover other sentient creatures. These are collectively known as non-humans, or more derisively, as goblinoids. Though slavery is illegal in the Commonwealth, these races enjoy little protection from the law. They are often either displaced and forced to live on the outskirts of human settlements, or they are pressed into indentured servitude. When subjugation or displacement isn’t possible, genocide remains an accepted option.

As the need for more complex calculations grew, so did the Antikytheron, eventually becoming the wonder that is the Great Machine. Dozens of worlds now contribute to the development and growth of Corregidor, and with it, the Great Machine. There have of course been troubles since the War of the Last King, but rather than threaten the very survival of the entire culture, these have been more like rejuvenating brush fires. They have relieved population pressures, opened for increased technological development, and tied the victors closer together by a shared history.

Many of these wars have been started as religion has taken hold and threatened to overturn the status quo. The danger imposed by the worship of gods was predicted by the the Antikytheron in the first generations following the exodus. As such, the Lex Deorum, the law against worship of gods, is the oldest law in the Commonwealth. As new worlds are colonized and old ones are further explored, the discovery of god-like beings is far from uncommon. Starved for devotion, these entities will often latch on to whomever first comes across them and turn them into a prophet. Such awakenings can spread like an infection until it is clamped down on, often resulting in brutal wars between the enlightened and the fanatic zealots.

One enemy that has posed a serious threat on more than one occasion is the people of Varanger. For most of history, these two civilizations have been like rival siblings, conflicts sometimes erupting over a resource rich moon or asteroid field, other times, trading peacefully. This all changed when the Ordo Ultima Thule took assumed control of the Varangian civilization. It was further intensified when their homeworld was destroyed by the dark god they had sought to enslave. As a result, the surviving Varangians were forced into their second exodus. Without a world to draw resources from, the OUT forces turned to raiding supply shipments and settlements, killing or abducting anyone they came across. Often, the vessel or settlement would be left corrupted by dark thaumaturgy and would have to be destroyed to stop the spread of infection.

When Argos reappeared only years ago, it caused a resurgence of deism and mysticism across the Commonwealth. This was further exacerbated when the great comet Male Astra appeared in the Hinterverse. As it drew closer it became clear that it was heading for Argos. At the same time, the Ordo Ultima Thule became more active, with ships in greater numbers than they had been thought to possess coming out of the vacuum. Doomsday cults, Thulean insurgencies, religious awakenings, and rebellions are popping up like toadstools across the worlds, threatening to upset the delicate balance that allows the entire civilization to prosper.

Life in the Commonwealth is one in which everyone is just a small cog in an enormous machine. The lowliest Vermillian farmer is contributing to its upkeep and operation, just as the navy sailor patrolling the Argonian Arm, or the captain of industry on Corregidor. All contribute to the stability of the system they rely on to keep them safe among the stars.