At this point in the chronicle all of the magicians have reached Adept in one sphere, and at least three of them have declared that they are aiming for the fifth dot, or Master. In pure mechanical terms this is no different from any other XP-purchase (next x 7 or 8). But as becoming a Master is a significant character development, I have instated a small house rule; the Masterpiece.

This rule covers both game mechanics and flavour, and as such it describes both the role-playing issues and the system. 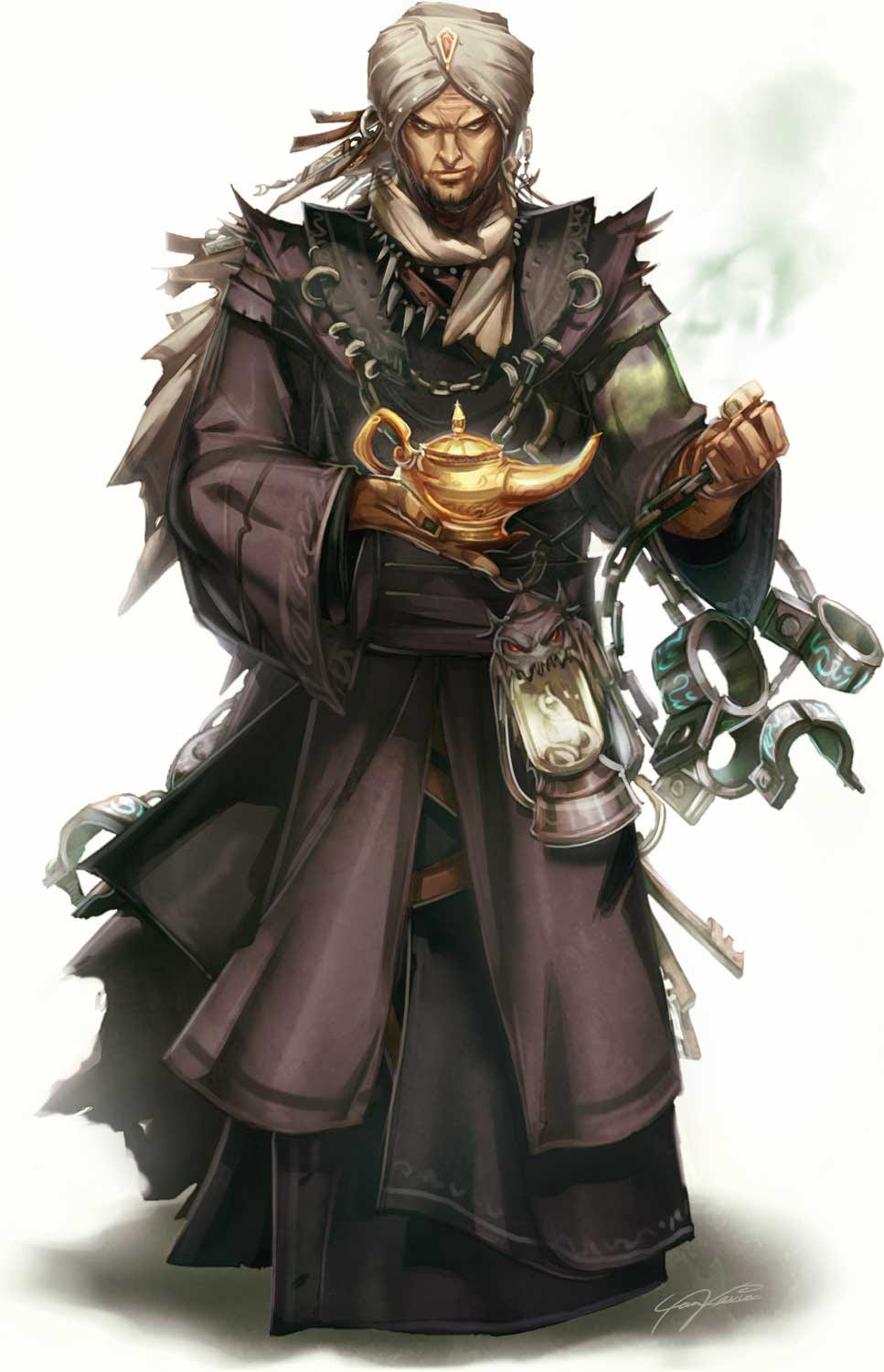 ~Master Kazeem al-Askari of the Council of Awakened Viziers ~
Picture hosted by paizo.com
Houserule concerning Arcane Mastery
This is not necessarily the final version. This is for review and play-testing. I am sure that within not too long we will have a final solution.

mas·ter·piece (măs'tər-pēs')
n
1 An outstanding work of art or craft.
2 The greatest work, as of an artist.
3 Something superlative of its kind.

As the magician develops his understanding of his art, from the rudimentary techniques of the Initiate to the extensive command of the Master. Before the magus can ascend to the next level of mastery (e.g. from Apprentice to Deciple) he must acchieve full proficiency of the arts and techniques of his current level. He must also demonstrate his understanding of the magical theory behind his willworking.

To become a Master in a Sphere, the highest level possible for a mortal, the mage must create a magical effect surpassing everything he has acchieved up to date. He must formulate the theory, accumulate the experience, make preparations for the casting, and finally weave the pattern/create the effect.

The theories may, and most often will, vary from character to character, and from player to player. To become a Master, it isn't enough to merely have read the rules. An individual interpretation is also required. Note that inventing the blackpowder isn't neccessary, but explaining (based on the rules as well as the magicians theory) how you can create a similarly spectacular explosion (figuratively, of course) is.

There is no right and wrong when it comes to formulating a magical theory. The matter-of-factly approach can be just as good as the metaphysical/esoteric one. What counts is that the magus has a theory.

Magical theory is closely connected with the character's style of magic.

Preparing
A Masterpiece is not a spur of the moment feat, and it will require planning and preparation to successfully pull off. Whether this involves gathering components and magical substances, or fasting and meditation, or something else all together, depends on the style of the magician.

Experience
Before the magus can begin his Masterpiece, he must have accumulated the neccessary experience points.

Weaving/Creating
When all the above criterias have been met, when the player and the Storyteller have reached an understanding, and when all the modifiers have been calculated, the magus may attempt his Masterpiece.

The player rolls his modifed Sphere+Gnosis dice pool. If he acquires 5  successes, the Masterpiece is accomplished, the XP-cost is paid, and the magician may call himself Master.

If the roll results in a failure, the magus may attempt again no sooner than the next chapter.

Note that all the above mentioned steps should be completed in dialogue between the player and the Storyteller. Magic is one part rules, and two parts creativity.