On new years and storyteller's block 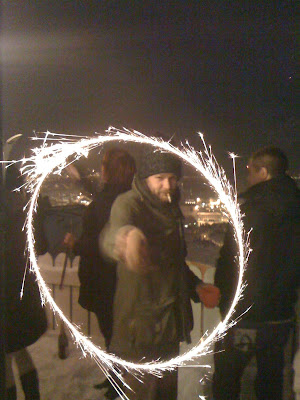 First off, Happy New Year! I am truly optimistic. We are leaving the Decade of Terror that was kicked off for real by 911. Since then, we've had Dubya, the War on Terror, a bona fide depression, a couple of pandemics, and we've seen the true face of global warming. The new year, nay, the decade, starts off quite epic. We are entering the second year (and everyone knows that the first is mostly cleaning up) of President Obama, a World Leader elected on HOPE. It's not much, but hey! I'll take what I can get. World leaders are finally agreeing that unless we do something, the climate is going to shit. They're not doing much quick, but honestly, how fast do you stop a supertanker on full speed? We're at least in agreement (after a fashion) on the colour of shit.

Now, my good friends, we've left the primitive (though formative) years of the 20th Century and truly entered the 21st Century, and I'm optimistic. The dragon is awakening, the USians are getting a civilized health care plan, we have Jonas and Jens...

For my part, I avoid airtravel when I can and use reusable shopping bags, I don't own a car and walk to work -- carbon footprint FTW! Seriously, the last decade went to hell, but I believe we, Man, will do better in the new one.

Secondly, storyteller's block, it happens. Usually when the chronicle is well established. When the plot is laid out, when the characters are established, when you see where you're going, that's when the fucker sits down at the gaming table.

I've been struggling with this beast for the last month. Look at the post-count for December 2009 if you want hard numbers.

Now, once every blue moon a story survives storyteller's block, and it so happens that the last year ended in one (blue moon, stupid), and we had a partial lunar eclipse to boot. So, what I'm saying is that I am optimistic about the new year, and that I will do my very best to keep the Book of Reckoning alive as long as I can. I am truly blessed with a good group of good people and good friends, and there are still so many stories to tell, so it shouldn't be too much of a chore [insert appropriate smiley].

Happy New Year, good people. See you back on Argos.