Tucked away between forbidding mountains, hidden in the deep, old forests on the northern shores of the White Sea, lies Thule, the realm of the wizards of Ordo Hermetica Argonis. Thule is a closed realm, and the few outsiders who visit never get past the port-town of Göteshafen. Little is known about the enigmatic masters of the Thule, and they are seldom seen at all, ruling, it is said, from the Obsidian Tower somewhere deep inside the mythocratic realm. Their will is carried out by the Proxima, a body of men who, if rumors are to be trusted, are everywhere within their masters's area of influence.

In the world of Man, magic is not allowed, and for more than a millennium the Temple and Cabal has been steadily and methodically crafting a paradigm where Reality itself will resist open magic. Still, the Hermetics, in their tower, have managed to preserve their own paradigm. Within the borders of Thule, no one doubts the existence of magic, or even creatures of magic. It is also said that as long as the Masters are in the Tower, the crops of Thule will never fail.

For generations upon generations, the Hermetics have appeared as an arcane body, seldom speaking at all, but with a single voice if they did. Now this appears to have changed. On the Pius's first trip to Göteshafen the crew met Adeptus Octavian. He hinted towards a conflict within the Tower, and on their next encounter, he promised to come to the aid of the Host despite of the will of Grand Master Mithrandes. 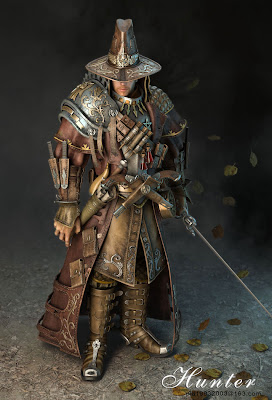 Octavian
Artist unknown
Octavian Augustus Arbalestus bani Flambeu, Adeptus of the Arts, Border Warden and Captain of the Aegathon, together with two adepts has left Thule with two ships. He has pledged to support the struggle of Man against the Deep, and appears to have left the order.