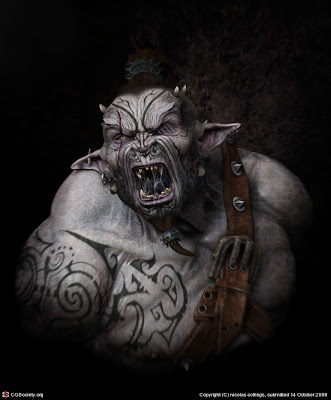 When Darkness was defeated in the First Great War, the Orc was hunted by both Elf and Man. The Black Blood was all but vanquished, and driven deep into the wild regions of Argos.

On the Broken Coast of the Dark Continent, small tribes survived deep in the fjords, valleys and mountains. These lands were harsh, and Man had no use for them, so the Orc was left alone for most of the Second and Third Age.

Now, the Orc is not a particularly advanced race. Its society is dominated by the warrior, and martial prowress, strngth and cunning are the only respected qualities. The tribes are split into warbands, each no larger than the leader manages to rule through force and intimidation.

Truebloods
The society of the Orc is male dominated, and females are regarded as property. The strongest warriors mate with those females he chooses, and the weaker ones have no chance to procreate unless they manage to rape or steal a female from another tribe.

The Orc's physiology demands meat. In fact, they need meat to retain their strength and their wits. A Black Blood who can't eat meat regularly will grow docile and dim. This has led to two classes of Orc. The workers, who eat swills and vegetables, are smaller and more decrepit than the carnivorous warriors.

As a point of interest it could be mentioned that before the occupation of the Colonies, there were Orc slaves kept by human entrepeneurs. This was technically illegal, as even vegetated Black Bloods could be dangerous. The most dominant drive of the Orc is the hunger for flesh.

It is said that the only thing the Orc craves more than Man-flesh is Elf. It is known that a Black Blood, even if vegetated, can enter a feeding frenzy if it were to get hold of meat. This can also spread throughout the group, leading to a violent attack on any human in the vicinity.

This feeding frenzy is also a part of the aftermath of most Orc attacks, as the warriors will ravage and feed on the defeated enemy.

Pit Born
The Orc does not possess magic as such, but it is known that there are shamans amongst them that know certain dark rituals. The breeding-pits are an example of this.

Before the Rise of the Orc, Pit Born were seen as champions. On the few known occations where they were spawned, they were let loose on the enemy. Simple minded, with only rage, violence and hunger in their heads, they were seen as the embodiment of the anger of the Black Blood.

After the Awakening of Magic, the gift of Industry, the Rise of the Orc, and the Coming of the Darkness, the Orc has developed the Pits. Deep in the Fallen Star Mountains, in dark caves, vast pits spawn hundreds of Pit Born Orc each day. Shamans and tenders cut hungry warriors from their leathery wombs, the tar-like primal slime dripping from their muscular bodies. Then they are marched off to the Black Horde, or given to servants of the Deep as guards.

The Pit Born have no other function than murder and war.

Half-Orc
Luckily, there are extremely few examples of such a blasphemous offspring of Man and Orc. Most women who get ravaged by a Black Blood will die from it, either during the conception, or during the pregnancy. No human is known to have survived giving birth to a Half-Orc, and should the offspring survive, it should be killed immediately.

Storyteller's note: I am looking for pictures of orcs that matches with how they look inside my head, but since I lost the one I felt gave them the justice they deserve, I haven't found it (or a new one) yet. Stay tuned...