The Temple goes back almost a millennia and a half, to the Cult of Man Invincible in the Erian Empire. The Empire itself was destroyed by an Elf army from the House of Cherlandar around 300 BC (Before the Covenant). By then, the cult had gained a foothold in the Skythian tribe, and the Massacre of Bàrn Tallar, as the battle has come to be known as, gave the cult an increased following.


At this time, the Wars of the Priests had lasted for almost a generation. These were wars where powerful priests led their followers in war against unbelievers, and several tribes were destroyed or forcefully converted. The most famous of these tribes is the Enæïdùn (see the Chronicle of Mirryn).


In this turbulent time, the Skhytians, a large tribe that lived on what we now know as the Corinthian peninsula, built their empire. The first emperor, Flavus Pentagenal, led his legions against the worshipers of the deity Xuul, and in a campaign that lasted five years he destroyed every temple to the god. The Godslayer War ended when the emperor's adopted son, Ares Demagos, slew Xuul himself at the Battle of God's Demise. Ares was killed himself, but he was elevated to sainthood by the Cult of Man Invincible on the battlefield.


The empire's victory led to several tribes seeking the emperor's protection against the Elf and the armies of the gods. The empire grew enormously over the next century, and the cult became the state religion, and transformed into the Temple of Man Supreme.


The largest of the tribes that joined the empire was the Penderii, a powerful nation that originated north in today's Narbonne and Corillia. This tribe had pushed the Elf back for a generation, and brought a large army to the banner of Man. 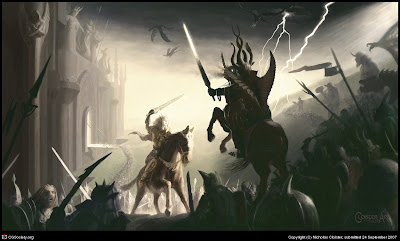 Over the following two hundred years, the Skythian Empire forced the elves out of mainland Eria, burned the great Aelvinwoode in present Pendrell, and eradicated all the god-worshiping cultures in these lands. The wars were ferocious, as the elves called upon the dark powers of the Creation, and the gods turned their full wrath upon Man; plagues, droughts, floods and other disasters were unleashed upon the peoples of Eria.


When Emperor Mariganus led the Great Armada to meet the Fleet of the Elf outside Waymar, fifteen tribes and a thousand ships sailed under the Banner of Man. Here the Elf was forced to sue for terms, and the Signing of the Covenant marked the end of the Second Age, and the beginning of the Third Age, the Age of Enlightenment.


With the enemies of Man defeated, the greatest general of the empire, Lord Solar Macharius, led his tribe, the Penderii in leaving the empire. The Penderii had followed their own philosophy, even when they followed the Temple's teachings, and now they abandoned the worship of the sanguine soul of Man in favor of the Doctrine of Pure Thought.


The High Temple of Man lies in the Enlightened City of Skythia, north on the Corinthian peninsula, and it is all that remains of the old empire - the Enlightened Skythian Empire claims direct descendance from the old empire, but in practise it is too wracked with internal problems to be a proper factor in religious politics.


Organisation
The Temple is led by the Most Sanguine Pontifex, who occupies the High Temple of Man in the Enlightened City of Skythia. He is advised by a council of cardinals. Cardinals also lead the provinces of the Temple, and below them, the præfects oversee larger areas, such as cities and mundane provinces. The faithful are guided by the perfecti, and it is they who preach the Message of Sanguine Existence to the unwashed masses.


There are two major orders within the Temple. The Most Sanguine and Faithful Order of St. Ares, who devout themselves to the pursuit of the Quintessense of Creation and the purification of the soul.


The High Order of the Mendicant Hospitalers of St. Hieromon seek to fully understand the Mysterium of the Flesh, and are widely regarded as the best physicians on Argos.


Lately, another order has become more influential, and today there are few humanists who do not cast a glance across their shoulder when its name is mentioned. Few know its true name, but it is referred to as the Black Hand, or the Witch Hunters. They have received a wide mandate to hunt down all Enemies of Man in the humanist kingdoms, and they do not shy from extreme procedures to safeguard the purity of Man.


Doctrine
Man is the purest of all creatures, and the soul of Man is a shard of Creation. Thus each human is sacred, even the lowliest beggar. What sets one man above his neighbour is the quality of his soul, and that of a king is naturally of a much purer grade than the soul of a peasant.


Through leading a sanguine life, an individual may purify his soul, and thus rise in the Hierarchy of Creation. The Arienites follow a regimen of purification in where they eat nothing that will taint their soul, such as meat, milk or anything that originates from a lesser creature. It is quite common for humanists to go through such a ritual, often with the intake of herbal teas to help the body cast out any impurities, before death so that their soul is as pure as possible before being returned to Creation.