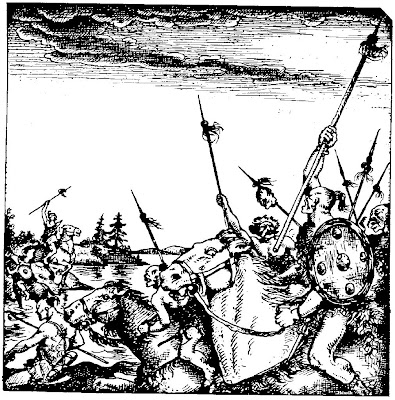 Present for this chapter were Bansl, the bombman, Percival, the warlock, and for the last half, Galan, the captain.
Throughout this chapter, the good ship Pius lay in the harbour of Borgen on the island of Cora. After having decided to go to war (last last chapter), the magicians set out to prepare themselves for battle.
Master Bansl spent much of his time in his (by now explosion-proofed) workshop on board. Here he cooked up powerful explosives and constructed devastating grenades. He also found time for some communing with his deity, the ever helpful Geminon.
While the rest of the ship was busy with refurbishing and planning the coming campaign, Master Percival, a.k.a. Drake, a.k.a. Arkrash M'narkl, etc. went about looking for a suitable Umbral entity to summon and bind. At one point he considered attempting to call forth the ghost of captain Armand. After some deliberation, he decided against it.
Here I must confess that I was hoping he would go for it. I am a cruel GM.
I also have to add that while he was debating what to do he came up with a wonderfully hare-brained plan: he wanted to create dopplegangers for the cabal, to be sent in to situations where death was certain. For this he needed a few people who were completely innocent and had no affiliation to any other party. That, or he could use corpses. He has a Humanity of 3*.
When it was pointed out that this sounded awfully like virgin sacrifice, he suggested using slaves or something instead. Or corpses. This was not put into action.
He then turned to the Astral plane, and after some research ended up with the Corinthian, one of the Named Nightmares. The summoning circle was carved into the floor of his cabin, and the ritual was cast.
Percival's plan was to enslave... er... come to an agreement with a spirit so that he could have it kill whomever he wanted. After some negotiations with the Nightmare Demon, he ended up with asking it to provide the name of the king of the eastern barbarians. A price was not agreed on.
Master Galan ordered commander Spearhawk to see to all the practical issues, and called Tavi. The one-armed Hermetic Master shed some light on the Kengelian situation, and could also promise help. The help in question was to provide a corridor for the barbarian horde to pass through on its way to the open plains of Ruhani (that is the cabal's plan, at least so far). He could not send warcabals or aid in the war in any other way, save by providing councel.
Now the heroes went into action. Armed with the name of the king, Samil Raga, Master Galan wove a scrying spell. For a day they followed the warrior-king's moves, and when night fell the cabal moved.
Travelling through the Dreaming, they reached the Raga's tent. Here they called forth a nightmare and let it loose on the sleeping young king. Trapping him in sleep, they waited. After a time the woman sharing the bed of the barbarian stirred and put her arm around her lover. Not prepared to let their spells be interfered with, the magicians dragged her into the nightmare as well.
Now the Raga showed his quality. He fought his way through the horrible dream, and freed his woman. Upon waking, and seeing the king still in the clutches of the nightmare, she cried for help. Guards, shamans and witches quickly filled the tent, and the cabal withdrew.
On the second night, the same thing happened. The nightmare was summoned and set upon first him, then her. Again he freed her, and she summoned help.
This was repeated the third night, despite the primitive wards set up around the tent of the Raga. On the fourth night Master Galan brought the sleeper to a beautiful dream of the Ruhanian plains. Instead of embracing this new and alluring dream, Samil Raga called out a challenge to the demon who had been riding his dreams. Galan responded to this insolence by a terrible psychic assault that nearly split the king's head open, yet still he wouldn't yield.
On the fifth night, the magicians decided to show their might. Galan sought out three of the Raga's closest lieutenants and slew them in their sleep. Meanwhile, Percival made for the Raga's camp, intent on letting the Corinthian show the insolent barbarian the meaning of fear.
When the warlock approached the camp, he found that the wards had been vastly improved - a ring of watchfires blocked his way, and the skulls of countless oxen, drenched in human blood after a day of sacrifice, stared into the Umbra from tall poles. His familiar, the fox-spirit Valdvix, warned that the barbarians' gods were abroad in the night. The Master of Spirit tried to breach the wards, in vain. He did not return to the Pius.**
Despite the efforts of the Masters, the barbarians still remain outside their control.
* In the Book of Worlds, Humanity is used for all human characters. It functions both as the Humanity from the WoD book, and as a sort of sanity-score.
** Percy's player will not be back for a while, and the fate of the warlock will have to remain undecided until then.
[Picture source: The Permech Lounge]