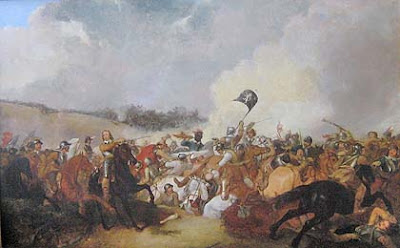 This is the way to deal with the Horde...And of course, make the river in to a greamangus wave to wipe em out...

The quote above is from an email I got from one of my players an hour or so before the session started. I decided to include it here because I still don't know exactly what it means. I do like the sound of a greamangus wave though.


Now to the business at hand. Present for this chapter were van Saar, the mythocrat, Galan, the sorcerer, Bansl, the battlemage, and Tito, the wolf-kin.


A new magician joined the cabal before the battle. Velimir Tito, a theurge from Draccia, the realm of the Wolf Lords. The Pureblood magician came aboard the ship with his bodyguard of six Grey Knights, and letters of recommendation from both the Wolf Lords and the Knights of St Invictus.


The good ship Pius was still moored in the harbour of Borgen on Cora, and the cabal were still ironing out the creases in their cunning plot to divert the Flood from overrunning the kingdom of Kengel. One thing they all seemed to agree on, even the notoriously atheistic van Saar, was that Geminon, the demi-god, was to be played up for all he was worth.


The deity was summoned, and as he is quite happy to be a part of this venture, he appeared quickly. The masters started by demanding that he provided at least ten thousand troops for the coming battle. Geminon laughed at this, and promised two thousand soldiers, but he could put these in the field where ever they were needed. These men were the army of the Kengelian Prince Waklaw. After having scorned this pathetic host (and made the deity leave in anger), the cabal started looking at ways to bolster these ranks.


In this time and age, pulling a thousand troops away from a any front will leave a vacancy hard to fill, but still the mighty magicians managed to pull a few rabbits out of their hats. Van Saar, the great chronomancer, wrote a letter to Aktor Smit's past, asking him to have troops available for this particular battle. Smit, by now a very influential figure in the Enlightened Alliance, managed to have 1,200 musketmen ready for deployment.


Captain Galan, always the demagogue, held a flaming speech in Arkonshov, the main Erian temple to Arkon. Once he stepped down from the pulpit, six hundred faithful had answered the call to arms. Six hundred irregulars, or in a word, cannon-fodder. Last, but most certainly not least, the Wolf Lords sent a hundred Grey Knights.


When Geminon was summoned again, the plan quickly became clear. The assembled army would be marched through the Umbra, and strike at the main camp of Samil Raga in the wee hours of the morning. The force now counted almost four thousand, and so without further ado, the masters ordered the advance.


Coming out of the night, the Erian army took up position on a narrow field where the numerically superior barbarian cavalry couldn't manoeuvre freely. Even if the enemy, led by the warlord Tinguan Rak, managed to deploy before the battle, the superior firepower of the magicians and massed musketry quickly stopped the oncoming flood.


Within not too long, the barbarian charge was broken, and the enemy routed. In the chaos that followed, Tinguan Rak was captured by the Grey Knights. More than 1,500 barbarians lay dead on the field, while the Erians had lost less than five hundred.


This play-test of the War Box has exposed a few things that needs changing/adjusting, but I will not go into that here. I am looking forward to seeing how this battle will affect the future play, however. Will the cabal now walk the battlefields of Argos, or will they decide to leave the soldiering to others and walk the misty roads gods and higher beings.