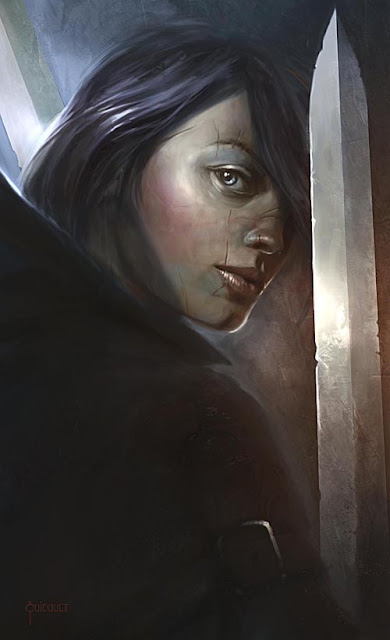 "You have no place in this world, deepspawn, nor will you ever leave it alive!"
Doña Analea is the widow of Faleandros Castillaverde, Knight Commander of the Knights of St. Invictus. Her father was a merchant in Victoria in the Old Colonies, and the family fled to Cora when the Dark Horde conquered the Colonies. She met Fale when he served in the Order's garrison there, almost fifteen years ago. The raven-haired young girl and the knight fell deeply in love, but the romance seemed impossible, for as a Knight of the Sword, Faleandros had sworn a vow of chastity.
What changed their lives, and bound them by a bond even stronger than marriage, was the intervention of St. Invictus. In 1008 YE, the Grand Master was visited by an apparition of the saint himself, telling him in no uncertain terms that the marriage was a Right and Just thing, and that the laws of men should be set aside for the good of man. And so it was that Faleandros and Analea were wed by the High Prelate of the Order on Invictusmass later that very year.
It may well have been the saint's intention all along, or it may have been the internal tension in the Order caused by the marriage of a knight that caused it, but within a year Faleandros received his promotion and was posted as the Knights' ambassador to the Waymar Islands.
The years in Freeport were the happiest in Ana's life. She gave birth to three healthy children, and together with Fale she built a beautiful home. The couple spent time hunting, riding, and fencing. The birth of their first child, a girl named Ascencion, brought a great change to her life. During labour, Ana Awakened to True Magic. Faleandros, being of a long line of enlightened magicians within the Order now devoted all his time to raising his growing family and educating his wife in the Arcane arts.
When the Ordo Ultima Thule started to tighten their grip on the Islands, Faleandros opposed them both openly and with all his might. He also strongly urged his wife to take the children back to Cora, but before this could happen, events took a turn for the worse. Cora fell, and the few reports that made it across the Outer Sea from Eria bore news of pyres and dark tribunals. Then the ships stopped returning all together.
By then the situation went from bad to truly dire. The Thulists no longer ruled from the shadows, but came out in the open. Fomori and Hellghasts rounded up all who dared speak against the new order, and no one saw them again. The night they came for Falendros, Ana and the children had gone to Port Edras to try and arrange for passage off the island for the family.
When word reached her of her husband's capture, she went through yet another great change. Deep in her soul a great fire erupted, and without hesitation she returned to Freeport to save her beloved Faleandros. She never found him, but she killed several fomori and three Hellghasts at the Donjon, and she recovered the Castillaverde artifacts before they were sent away.
Since then she has become known as Lady Furia, The Widow, and many similar noms de guerre among the population. She has tirelessly conducted a one-woman crusade against the Outsiders and all who affiliate themselves with them, for she believes that her children will never grow up unless the evil is driven off. Due to her zeal, she has become the de facto leader of the resistance on the island of Cordomar. She still searches for trace of her husband.

Storyteller's note: I made this NPC a good while ago, but only now has she become relevant to the game. I'm also a little miffed that it is so hard to find good pics of female fighters who doesn't look like they'd be more comfortable by the pool.

* The link is to the Camarilla Wiki, and gives the canon background of the Legacy. If it becomes important, I will post BoW-fluff for the Choir at a later date.