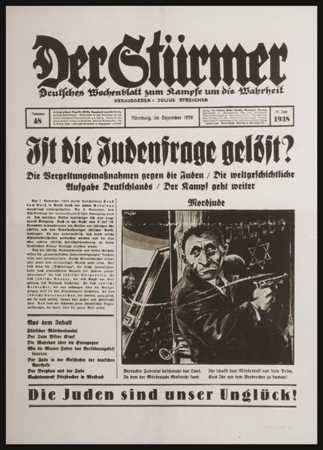 Tonight, the night between 9 November and 10 November, 72 years ago in NSDAP-controlled Germany, has become known as the Kristallnacht, or the Night of Broken Glass. On this night of infamy, civillians and SA stormtroopers all over Germany broke into Jewish homes and shops, breaking windows and furniture with boots and sledgehammers. The streets were littered with shards of glass, glinting in the light of the street-lamps, thus giving the night its infamous name.

Ninety-one Jews were killed, and 30,000 - a quarter of the nation's Jewish men - were taken to concentration-camps.

Thus wrote The Times of London at the time:


"No foreign propagandist bent upon blackening Germany before the world could outdo the tale of burnings and beatings, of blackguardly assaults on defenceless and innocent people, which disgraced that country yesterday."

Why is this important now? Because it serves a reminder to what we as humans are capable of if we let ourselves become swept up by an ideology. The Kristallnacht is not the only such horror we cannot allow ourself to forget. Two amongst the far too many such tragedies are the massacres of the Khmer Rouge and the genocide in Rwanda.
Please bear this in mind tonight.