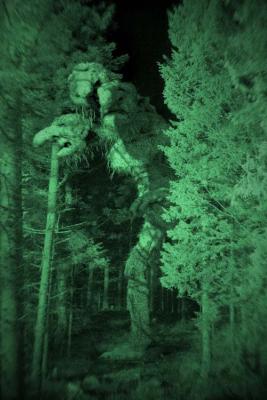 There are two major types of trolls, mountain-trolls and forest-trolls. These all have a few things in common. One is their stupidity - trolls are very, very dim-witted. Another is their hatred towards Christianity, and it is a well known fact that trolls are able to smell the blood of a Christian. This causes trolls to go into a violent frenzy.
The greatest vulnerability of trolls is their severe intolerance to sunlight. This is due to their inability to properly absorb calcium, and even a very short exposure to UVB-radiation will cause a violent calcium build-up. In younger trolls this causes their blood-vessels to shut down, and the result can best be described as something akin to an explosion - the troll will essentially burst. In older trolls, this build-up happens in their skeleton, and the appearance is that of the troll turning into stone.
In Norway, trolls have long been a part of our fauna, and there are currently three troll-reservations in the kingdom. The government has kept this a well guarded secret for more than a century, and TST, Trollsikkerhetstjenesten, or the Troll Security Service, has managed to cover up all troll-related incidents. Up until now.
Earlier this year, two hard-drives containing hours of footage were delivered anonymously to Filmkameratene AS, a Norwegian production company. Despite thorough investigation, neither Filmkameratene or the police have been able to verify the material on the drives. Nor have they been able to get in touch with the people appearing in the material. The four youths have disappeared, and the troll hunter, a man named Hans, has not been found. The Norwegian government has denied any connection to the events, as well as the existence of both trolls and TST.
The hours of footage has been edited, though not manipulated in any way, and has been released to the public. The documentary Trolljegeren, or Troll Hunter in English, has been watched by thousands, and yet there's no word from the government. The media has been treating this as a joke, but I have seen the film.
If you have the chance, watch Troll Hunter. Universal Pictures International will release the film in France, Spain, Germany, Austria, Benelux, Switzerland, CIS and the Baltic countries. Following the film's world premiere at the Fantastic Fest in Austin, TX, USA in September this year, a deal for US distribution has been made (1).
Ain't It Cool News