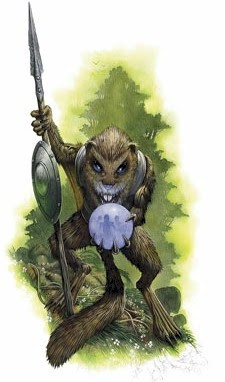 Storyteller's note: I now have two players who have spent Merit-points on totems, and so the need for something tangible has become apparent. The following is a draft, and depending on feedback, this post may be edited to represent the final consensus.


In the ancient days, before man built the first wall and forged the first blade, he looked to the spirits for guidance and protection. As he started building cities, man turned to other protectors, and so Totem-spirits were replaced by gods. Not all spirits left their children though, some remained, and some gradually became gods in their own right.


Even if many of the primordial totems have become lost to the world of men, those that still remain have great wisdom. In metaphysical terms, a Totem is very similar to a god, although of a lower magnitude. The differences are that while the deities are dependent on human worship for their strength, a Totem is not. A Totem that is abandoned by its children will leave this world, and return to the Ethereal Planes from whence it comes.


Today, Totems are still revered by primitive tribes outside the civilized realms, and, most noteworthy, by the Draccians. Here the Theurges maintain bonds with the ancient guardians of their people, and the newer gods have never gotten a foothold in the Realm of the Wolf Lords. Totems are old spirits, and they view their supplicants as their children. Once it has adopted a mortal, it will not abandon him unless he either willingly breaks the bond between them, or he repeatedly violates the Ban.


The player decides which Totem this Merit applies to when it is first purchased. Once this is done, it may not be changed unless under exceptional circumstances. The player may purchase more dots in this Merit to reflect a stronger bond to the Totem.


Each Totem has a Ban and a Boon, independent of the Merit rank. In addition to these, the Totem may also aid or guide its children. Once per session, to gain its help, the character rolls a number of dice equal to the Merit rank, and successes are added as dice to the task in question. This bonus lasts for one scene, or one extended action. As with divine favours, the aid of a Totem is not something to be take for granted; ultimately, the ST decides whether the Totem will aid in a given task or not.


It is very rare for a totem to manifest on the Prime Material Plane, and usually it will only do so if summoned by a Theurge. In such cases, it follows the same rules as other spirits.


Gaupa is one of the totems of the Wolf Lords. She will protect her children as far as she's able to, and the Draccian Theurges are known to have called upon her even on battle-fields.


Grandfather Runungar is wise and ancient. He will not involve himself in what he sees as outside his realm. He is known to reward those of his children who display stoicism and practicality, and to frown upon those who are rash and impatient.


[Picture Source: Wizards of the Coast]