CONFIDENTIAL
(restricted)
The Corps of Hellghasts is the elite of the Ordo Ultima Thule. Following the defeat of general Helmand Döner's forces on the world of Varanger the OUT went into hiding, and it is believed that they today control one fringeworld, as well as at least two larger constructs.
According to intelligence, the Hellghasts are picked at age five, and they go through at least fifteen years of gruelling training before they are accepted into the Corps. Reports indicate that they go through several graduations where they are pitted against one another in deadly combat, the victor being allowed to continue his training.
The final stage of the initiation is said to involve the cadette being inserted on a Netherworld alone, unarmed except for a knife. Here he is expected to track and kill a wolf-demon and capture it's spirit. If he survives, he will then have the demon-spirit bound to his soul.
The greatest caution is reccomended when dealing with Hellghasts, for they are utterly corrupt and extremely dangerous. They are all equipped with high technological weapons and equipment, they are highly trained, and they are fanatically loyal to the OUT.
Luckily, as far as we have been able to ascertain, the Corps of Hellghasts count no more than two and a half thousand, and as far as we know, they are deployed in batallions of five hundred.
CONCLUSION
When confronted, exercise great caution and proceed with due dilligence. If possible, kill on sight, failing that, observe and report. Do not approach!
Photogram A-04 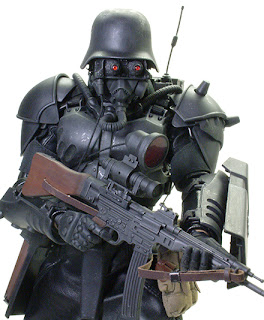